There really is not a lot of information out there about August 'Cap' Coleman, which is rather shocking given the importance of his legacy when talking about the history of tattoos. So, we've taken to the record offices and quite literally fell down the rabbit hole to see what we could uncover about this elusive character. 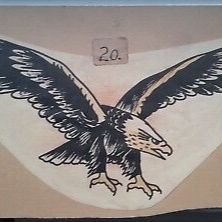 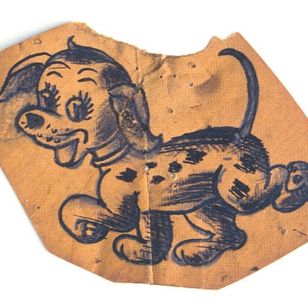 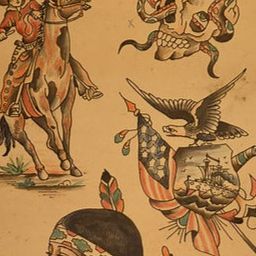 August Bernard Coleman was born on 15th October 1885 somewhere in Ohio, United States. His family was a little elusive themselves and whilst we know his father was called Anthony and born in the States, his family moved from Germany to the US around the time of his birth. In fact, Anthony Coleman's parents, John and Anna, are listed as hailing from Prussia. Finding our beloved 'Cap' in records has been, let's just say, difficult. Prior to the early 1900s, there seems to be a serious lack of any vital records surrounding the family. There is a very good reason for this though, as it seems they may have all run away to the circus. Okay not the circus, more of a carnival or sideshow life, but nonetheless, that is where we find Coleman in his formative years. 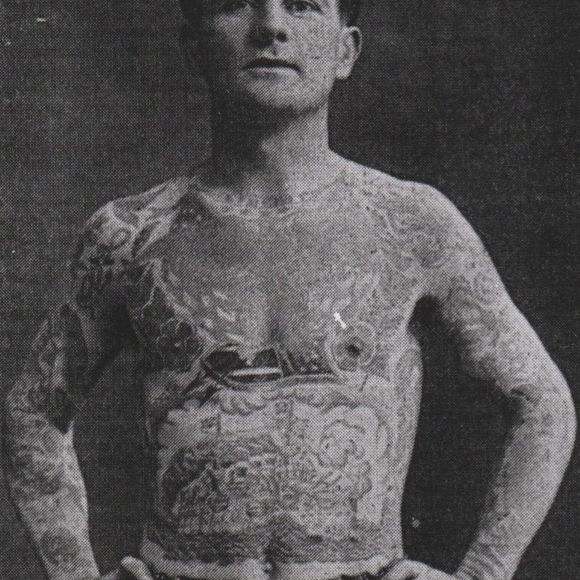 There is a story that floats around the internet and in documentaries, that Cap learned to tattoo from his father and that some of his personal ink was in fact by him. Now, Paul Rogers, who later worked with Coleman is stated to have been dubious about this, but it would make sense if the family was trooping around the country with the carnival.

Coleman was known as The Human Picture Gallery, in his later years of performing with Greater Smith Shows, Sheesley Shows and Johnny J Jones. He would have received many of his tattoos from the carnival workers as they traveled around the country. In fact, back in the 1800s and early 1900s, the carnivals were where you would go to get your tattoos, the term 'flash' we use today even dates back to this. At carnivals the workers would need to encourage the show-goers to get inked and would do whatever they could to attract them to their booths, including providing colorful inspiration; they called this tattoo flash. 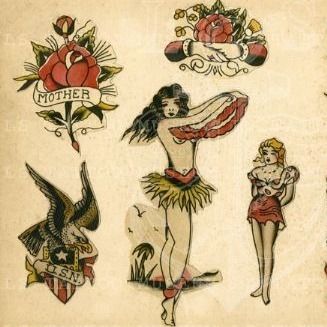 By all accounts, Coleman was a shrewd man, set on making his fortune, his love of tattoos, whether a result of his life as a human wonder or indeed as a result of his love for them, would be the way he made it. As he traveled with the various shows, he began tattooing and by 1912 he was beginning to want to learn more about the craft. Seemingly a natural, Coleman headed toward home after the Summer shows and sought out renowned tattooer Prof. Barber.

Jessie F. Barber had his own studio on Vine Street in Cincinnati, where he lived with his wife, Cleo. The well-established studio and Barber's reputation was a draw for the young Coleman, so much so, that come 1912, The Billboard reports in March state that 'The new tattooed wonder, A.B. Coleman, last season with the Smith Greater Shows, is spending the winter at J.F. Barber's studio, Cincinnati, Ohio. He will again be seen on the road in the coming season.' It is safe to say that during his time with Barber, an impression was made. Not only did Coleman gain more tattoos and learn a craft, he adopted the moniker of 'Prof' when establishing his own studio. 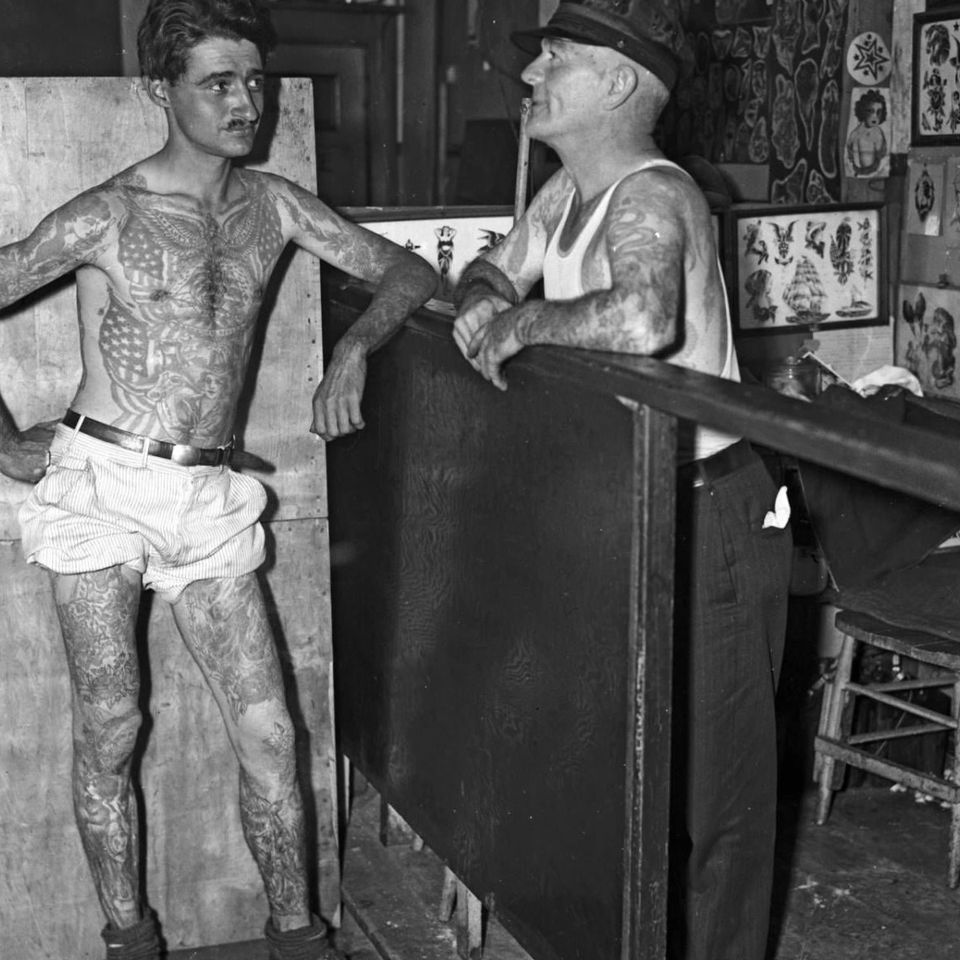 During the next 8 years, Coleman continued to travel with the shows. He met a girl called Lena Hewlett and they married. By 1918 World War One was in full swing, a brand new Naval base had been built in Virginia and it seems Coleman saw his chance to settle down and was reported in The Billboard as 'laying the foundation for a fortune tattooing soldiers and sailors. He will not be with the circus this year.' This is the first mention of Coleman using the title 'Prof'. 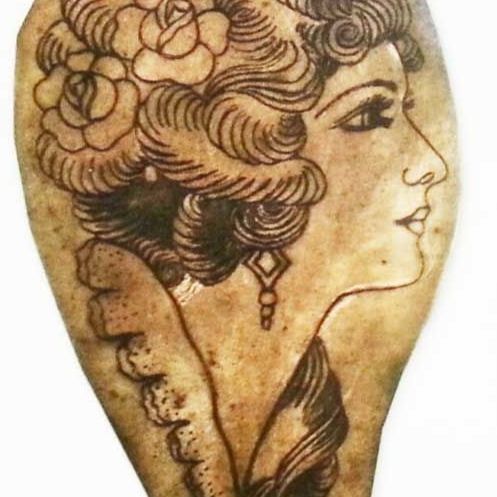 Norfolk, Virginia was fast becoming a port of activity, thousands of servicemen were there and the city quickly adapted to hosting them. East Main Street was a hub of activity and that's where you'd find all of the tattooers. Not long after arriving though, on 12th September 1918, Coleman was required to fill out a draft registration for the war effort. Listing his home address and work address, (self-employed) as 271 Bauk Street, Norfolk, Virginia, where he lived with his wife Lena; it appears that Coleman did not immediately make his way to East Main Street. 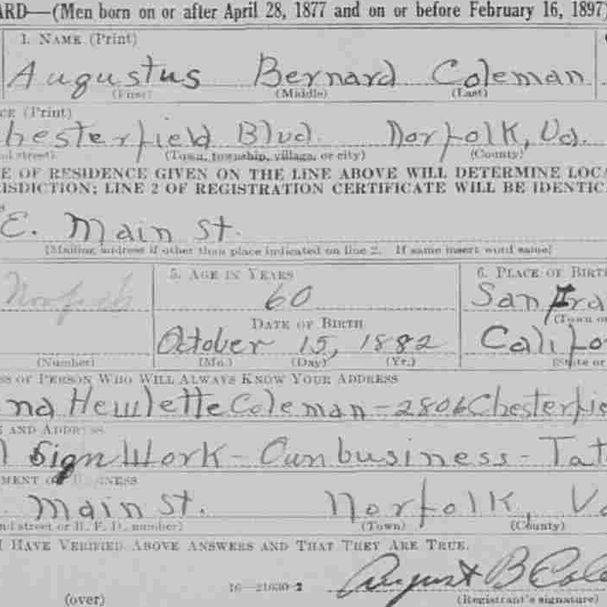 The Mariner's Museum states that at some point around this time, Coleman joined ranks with one of the people he had toured with during his time in the circus, Andy Stuertz. A fascinating story in itself, Stuertz had toured as the youngest boy ever tattooed, eventually leaving to join Cap and start a lucrative business, reported in The Billboard of March 1918.

Cap Coleman had a distinct and innovative style when it came to his own designs, he had bold lines and excellent use of shading. His work was of high quality compared to other tattoo artists that were around at the time. He knew how good he was too and was not a modest man, His shop and business card both sported 'if you must get tattooed, let Coleman do it!' and he was known for pointing out the poor work that people already had. 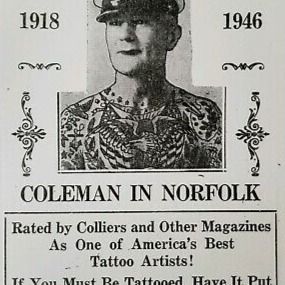 Throughout his career as an artist Coleman worked alongside not just Jessie F. Barber, but the likes of Charlie Barrs and Elmer Getchell, he also invited Paul Rogers to work with him after mistaking a few pieces on sailors for his own work. His association with some of the greatest names in tattoo history is illustrated by the fact that the legendary Elmer Getchell appeared to share some of his machine-building secrets with Coleman and even allowed him to sell his tubes using his studio address. It seems that right around this time, Getchell made such an impression on Coleman, that he began to use Capt. A. B. Coleman, replacing Prof. An advertisement he placed in The Billboard, June 8th 1920, states: 'Tattooers, Look. First Time Sold. My new style patented Sanitary Tubes. Will fit any kind machine. With my new tubes you can do better work. Makes the ink and colors go in easy and better. Best tubes on the market for your machines. Made of special metal highly nickel plated. Will last for years. Outlining and shading Tubes. Both for $5.00. CAPT. A. B. COLEMAN. 611 Main St, Norfolk.Va.' Having searched the Patent Office, it doesn't appear that Coleman made any application for patenting his creations. 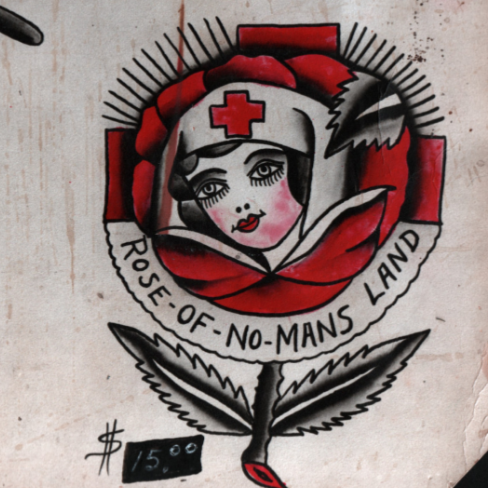 Over the next few years, Coleman built his reputation and indeed his business, tattooing was lucrative and it's popularity ever-growing. His clientele were servicemen by and large from the Naval Station and people wanted ink by the infamous Cap Coleman. It appears that tattooing was now more acceptable and in the 1930s and 1940s, Coleman even lists his career as 'tattoo artist' on the Census returns. This didn't last though; popularity declined throughout society and whilst business was booming, it became less acceptable to be tattooed (as in previous years), even to the extent that the Navy began discouraging their sailors from getting inked. 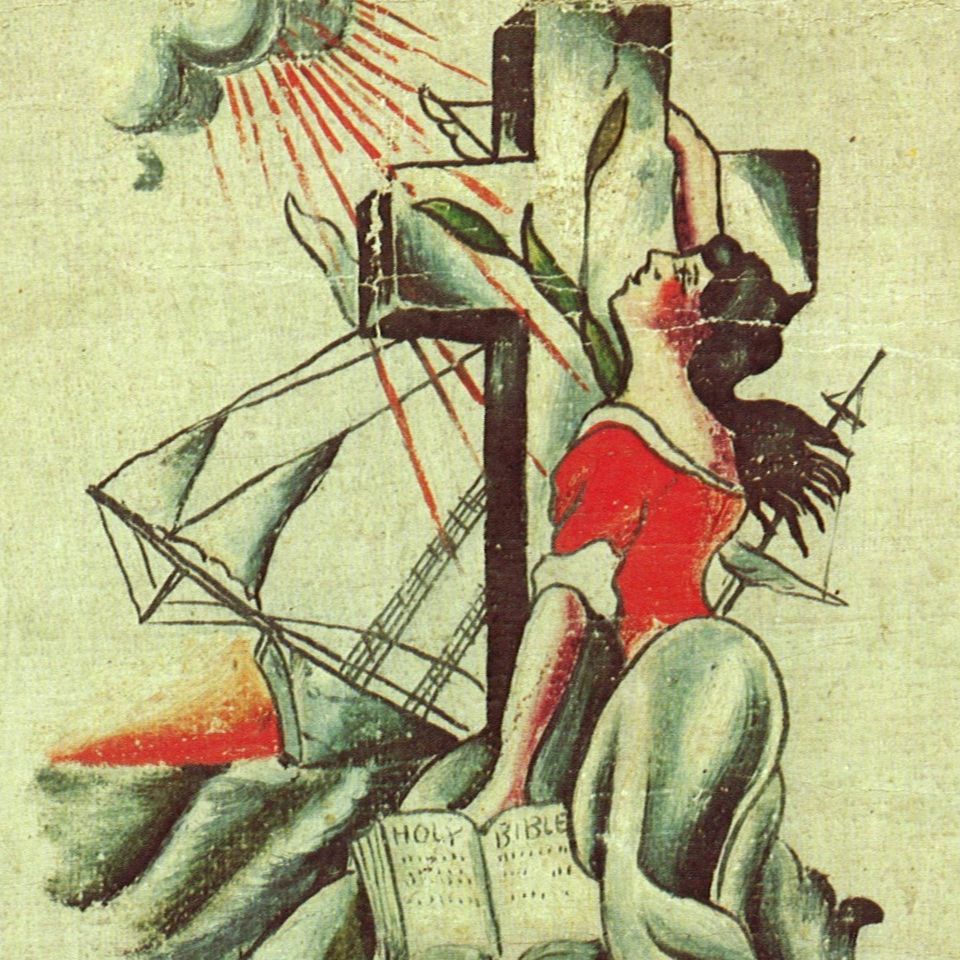 In April 1942 Coleman was again filling in a Draft Registration form for the war effort. This one is rather interesting as it lists a number of pieces of information, drastically different from what we've previously seen. Listing his name as Augustus, Coleman states he was born in San Francisco, California in 1882! Given the fact that his ancestry, indeed immediate family, were German, this can probably be explained, since many Germans settled in Ohio and Coleman perhaps adjusted his age in the hopes he wouldn't actually be drafted. There is no clear indication that Coleman ever served in any of the Armed Forces, despite having many nautical tattoos himself, including a turn of the century ship on his chest. 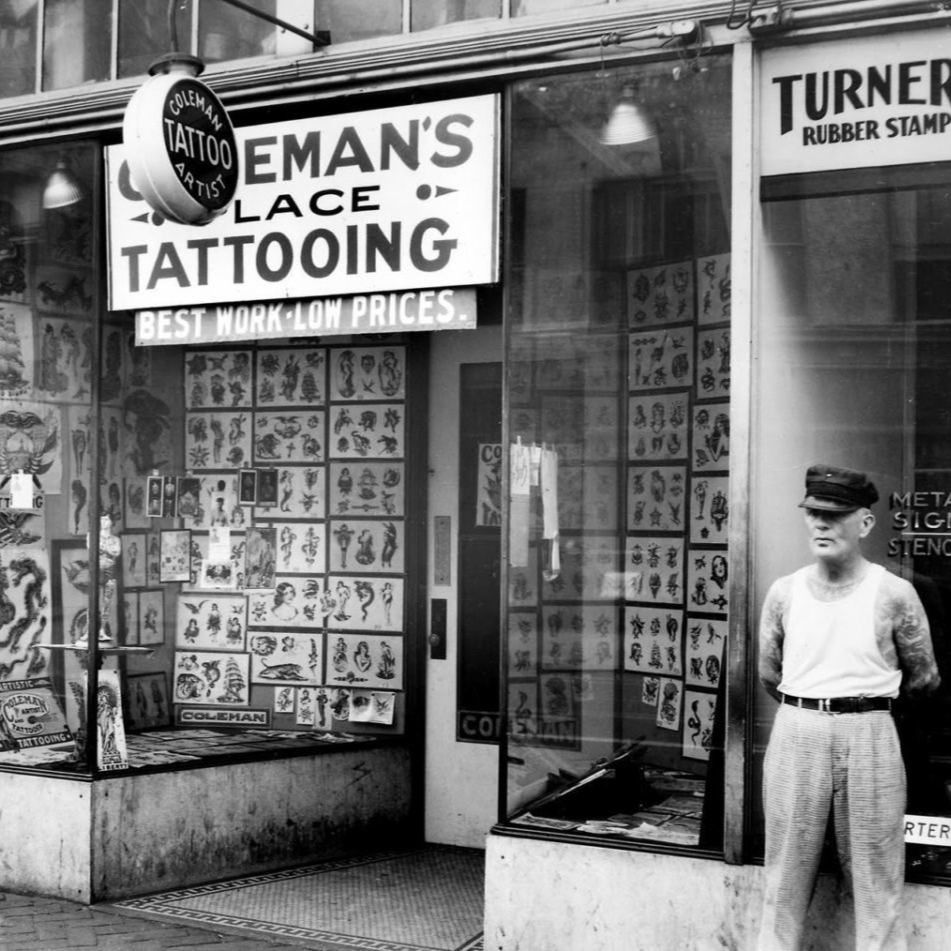 His residence is listed, along with his wife's details and '427 E. Main St.' as his place of employment where he carried out 'pictorial sign work – own business – Tattooing.' An extremely interesting thing to note is the description of Coleman on the draft card. Besides recording he was 5'4, weighed 145lbs, gray eyes and gray hair with a ruddy complexion, Coleman's tattoos are mentioned: 'Tattooed eyebrows + lids – tattooed body' 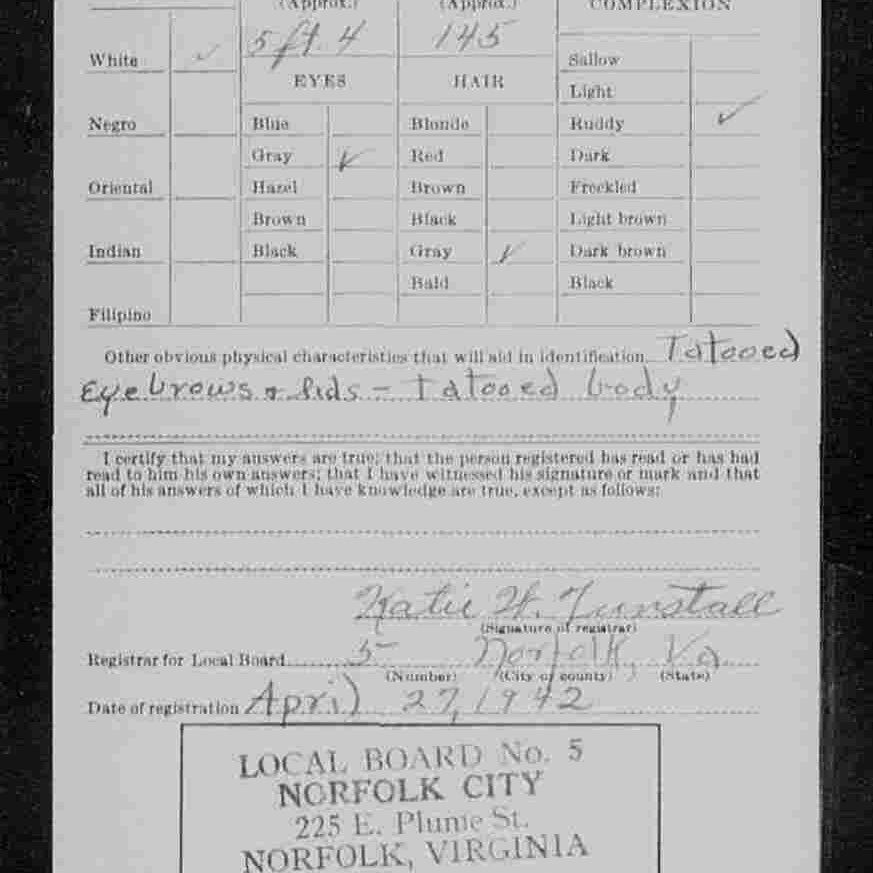 In 1945 Paul Rogers accepted an invitation to work with Coleman and joined him in Virginia. It seemed that Rogers was not that enamored with Cap, describing him as someone who didn't like people, was selfish and shrewd with money, apparently telling enlisted servicemen that if they had been vaccinated they would get sick if he used any inks other than red and black! Unfortunately, in 1950, Norfolk City Council passed Ordinance No. 15668, declaring tattooing to be illegal. A document from this states: 'WHEREAS, in the judgment of the Council it is necessary for the public welfare, public health and public safety that the operation of tattoo establishments, together with the practice and business of tattooing be prohibited in the City of Norfolk; now, therefore, BE IT ORDAINED...' 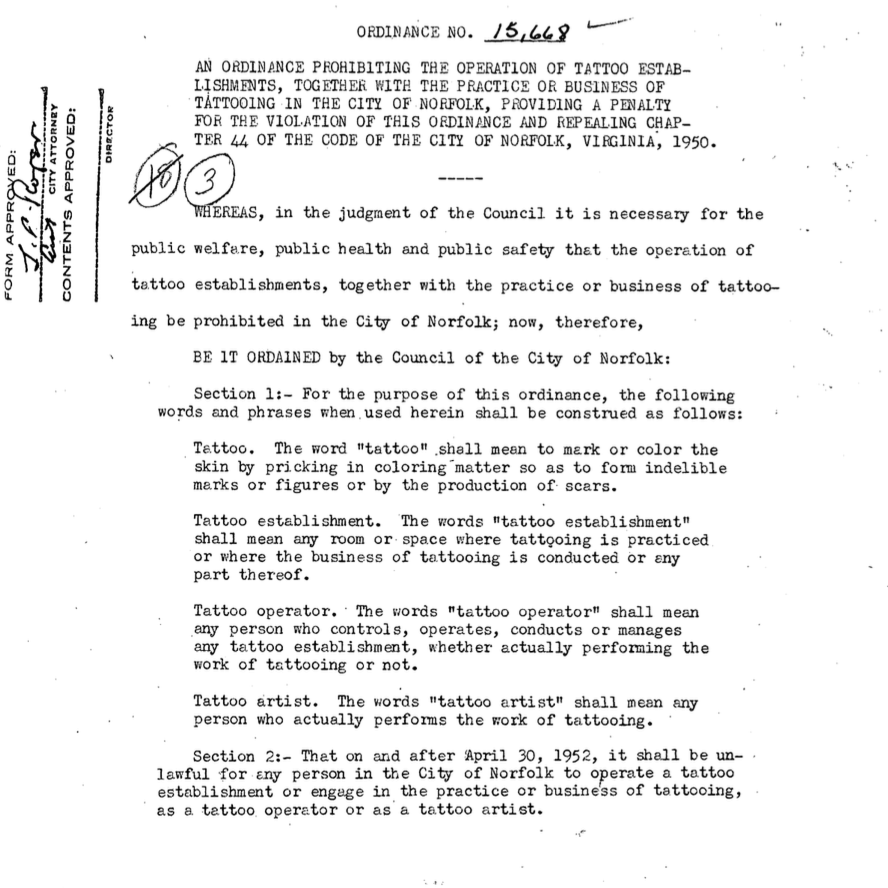 Coleman upped sticks and moved across the Elizabeth River to Portsmouth, where he continued to tattoo. His wife Lena died in 1956 and then sadly, just days after his 89th birthday in 1973, August 'Cap' Coleman fell into the river behind his home and did not survive. The death certificate is again confusing, listing his birthplace as Kentuck. It seems whilst we may be fascinated with this legend of tattooing history, there are many secrets to his life we may never be able to uncover. 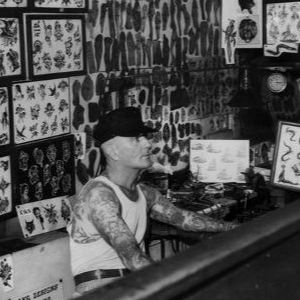 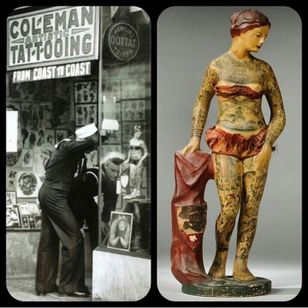 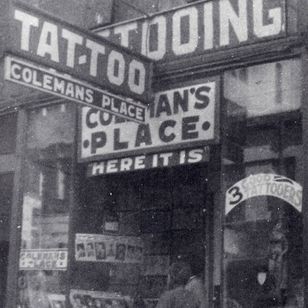 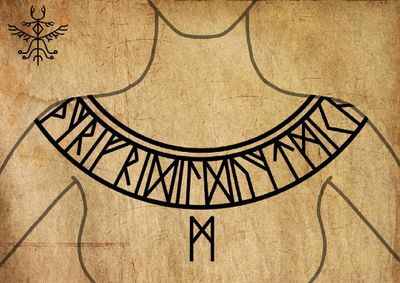 Viking Tattoos: Symbology of the Northmen

In this article about the Northmen and their tattoos, we look at the iconography of Viking tattoos.