Florence, Italy: the cradle of the Renaissance. Nestled on the banks of the Arno river, this beautiful city in the heart of Tuscany knows a little something about art: Giotto, Brunelleschi, Donatello, Leonardo da Vinci, Michelangelo and many others called this city home and their art can be found around every corner, in every church, in every museum. Florence has been breathing art for centuries - literally!

What better place than Florence then, for a vibrant and entertaining tattoo convention where Art is the center of it all? The 12th Florence Tattoo Convention took place on 8-9-10 November 2019 in a beautiful historical setting: Fortezza da Basso is a huge fort built into the fourteenth century walls of the city. The huge space was filled with over 390 international tattoo artists and traders, two stages for concerts and entertainment of all sorts, a wide exhibition space, conference area and much more. 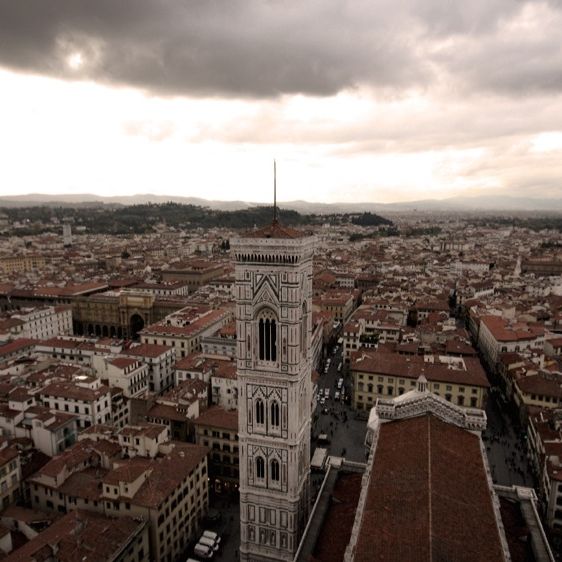 Just to mention some of the international artists who attended the convention this year: the French Polynesians of Hoata Tiki Tattoo, the Koreans of Orient Jehoo, the New Zealander Julious Mora, the Russians Dmitry Babakhin and Maks Kornev, the Germans of the Der Grimm studio, Branko Antevski, Randy Engelhard and Julian Siebert, the exponents of the old guard such as Bernie Luther (Austria), Bill Loika (Netherlands), Doc Price (England), the Spanish Dani Martos and Frank Crespo, the Serbian Marko Tattoo and the Italians Billi Murran, Kristi, Web, Rudy Fritsch, Ivano Natale, Davide Andreoli. 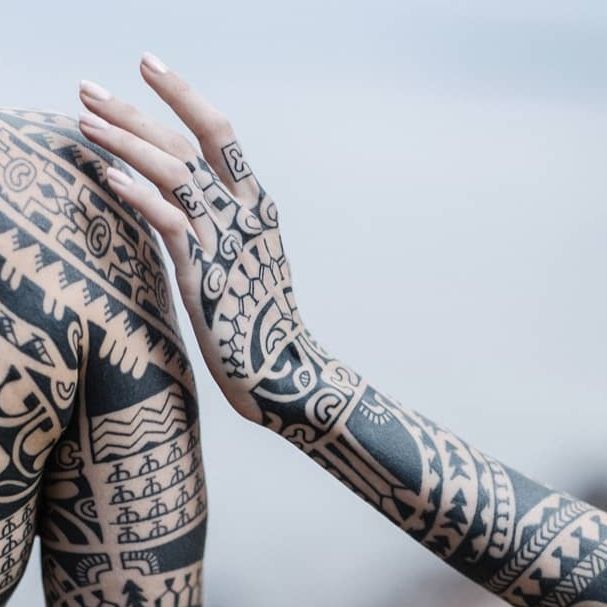 The pioneers of the Italian tattoo industry Gianmaurizio Fercioni and Gippi Rondinella were also in Florence attending the convention as special guests.

Gian Maurizio Fercioni is the Dandy of the Italian tattoo industry. Born in Milan in 1946, Fercioni has had quite a life. During his early years he studied at the Art Institute and at Brera Academy of Fine Arts, he worked as a costume and set designer in theatres all over Europe - theatre being one of his many passions, together with, of course, tattoos. He started practicing the art of tattooing “the old way” as a teenager, three sewing needles stuck together and a mixture of carbon-black and saliva as ink, tattooing his school friends. He grew up in Viareggio, a small Tuscan city by the coast, his father owned a boat and very early he started working at sea: his fascination with everything related to sea and sailors must have begun right there. Sailors and soldiers were the first tattooed people he’d ever seen. 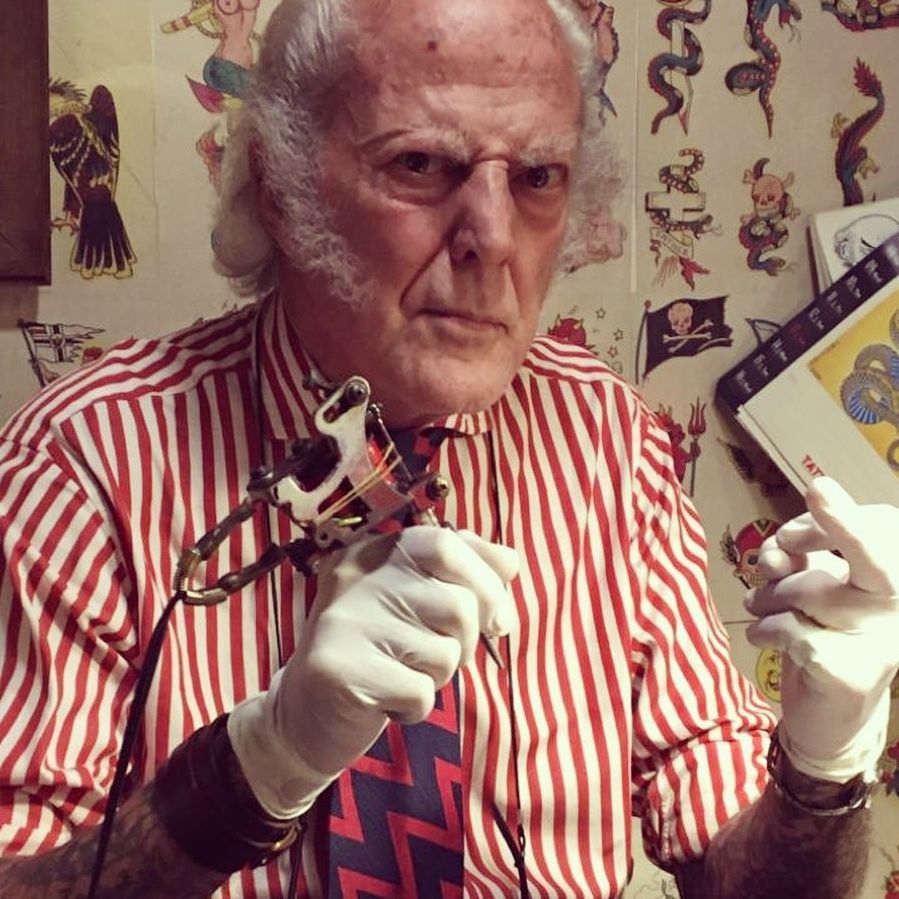 After years of traveling through Europe on boats and working in theatres as a set designer, while meeting and getting tattooed by the first european tattoo artists like Tattoo Peter in Amsterdam and Herbert Hoffman in Hamburg, he decided the time was right. He opened the first italian tattoo studio in Milan in the early 70s, named “Queequeg Studio” after a famous fictional character, a tattooed harpooner in Melville’s “Moby Dick”. Queequeg Studio in Milan has been his home ever since. Fercioni likes to call himself an artisan and his many passions include also creating and building his own tattoo machines, collecting primitive tattoo instruments and much more. This is why Queequeg Studio has also become an officially recognized Tattoo Museum where visitors can admire instruments, historical tattoo flashes, tons of pictures and other interesting tattoo-related material that Fercioni gathered during his lifetime of adventures and wandering. 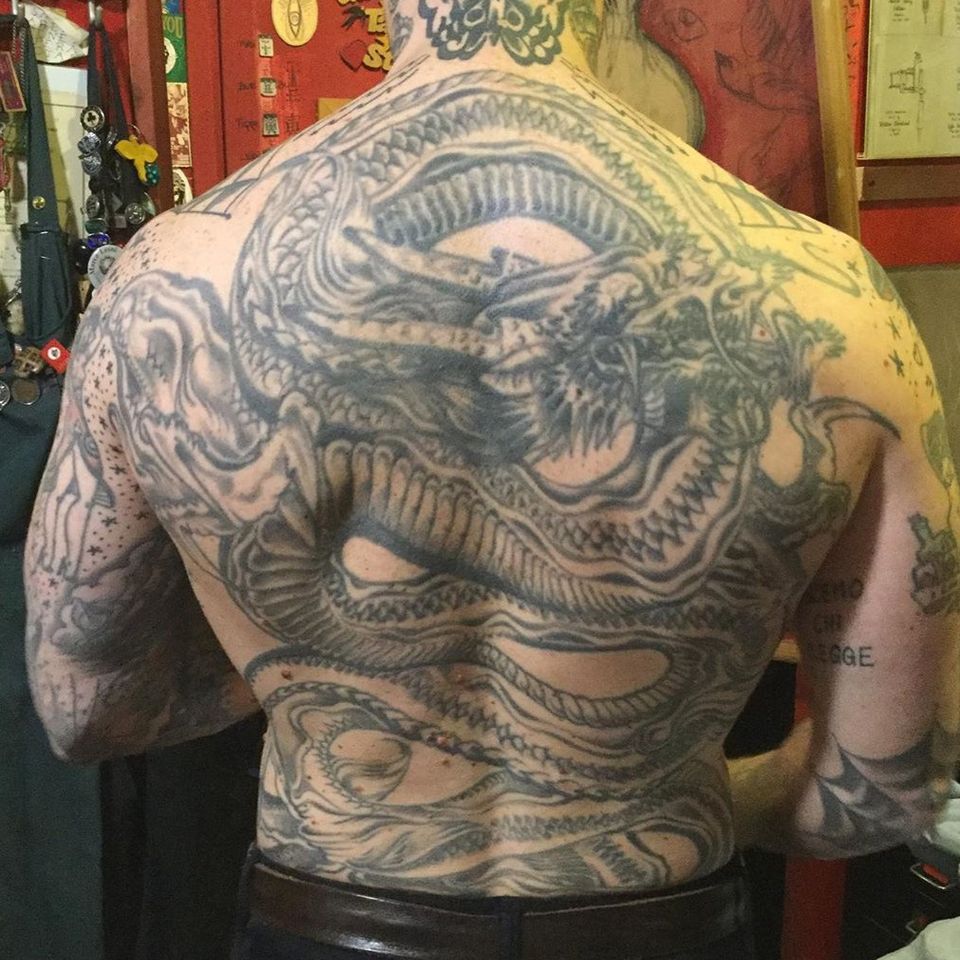 Gippi Rondinella is the godfather of the tattoo industry in Rome. He opened the first studio of the city in 1986, “Tattoo Demon Studio”, after years of traveling and tattooing only as a passion and without seeing it as a profession. Rondinella, just like Fercioni, would not define himself as an “artist”, rather an “artisan”. The art of tattooing is all about the hands, he said in a recent interview, the job of a tattooist is not much different from what a carpenter or a plumber does. Rondinella is today a “part-time tattooist”, he still likes to travel to attend some of the most important tattoo conventions worldwide, where he is always welcomed to share, just like Fercioni, his valuable knowledge and his incredible experience in the tattoo industry. 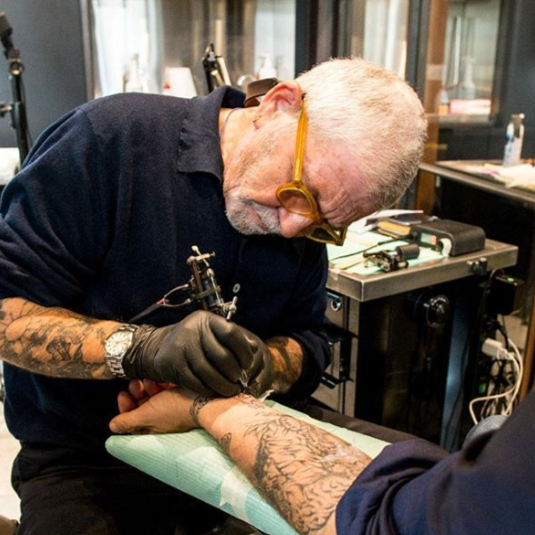 As every year, a specific part of the exhibition area with special platforms has been reserved to master tattoo artists who use traditional instruments: Elle Mana Festin from the Philippines, Samuel Olman for the traditional Olmec Mexican technique, Colin Dale who practices Inuit viking and Kila with his Nordic handpoke, Jona and Razzouk for Coptic tattoo and Lauretan, Kensho II, Ryugen and Horien who practice Japanese irezumi, Matthieu and Rung Ajarn for the Thai technique and Hendra and Durga for the bornean hammer. 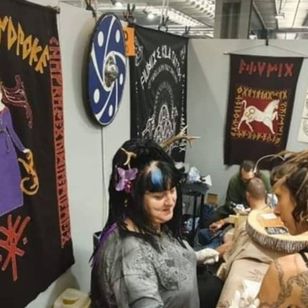 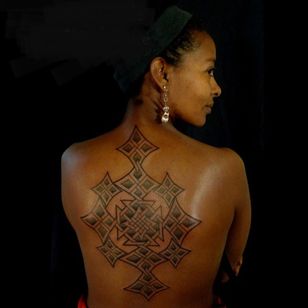 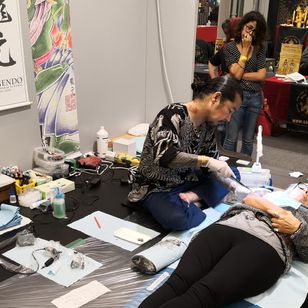 In a very interesting conference on Sunday, “The tattoo of Loreto and the Coptic Christian tattoo of Jerusalem”, Wassim Razzouk and Jonatal Carducci shared with the audience the history of ancient sacred tattoos. Wassim Razzouk from Jerusalem is the descendant of a family of tattoo artists that dates back to 700 years ago, moving from Egypt to Palestine a few generations back, tattooing Christian Copt pilgrims - usually a small cross on their wrist - to grant them access to churches. The tradition continues today, with Wassim and his own son as a future generation, tattooing pilgrims that visit the Old City of Jerusalem. 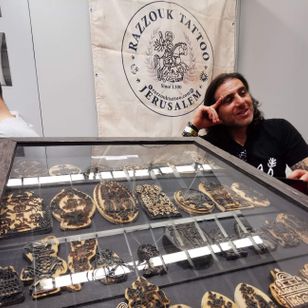 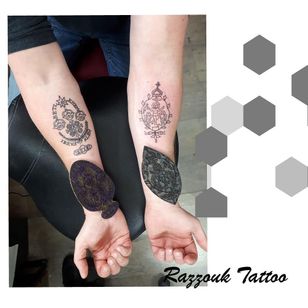 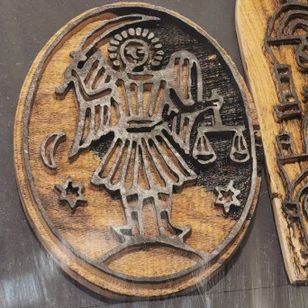 On the other side of the Mediterranean sea, a similar tradition and technique was kept alive for centuries in the area of Loreto, a small town in central Italy, a sacred place for Catholics: the Basilica della Santa Casa (Basilica of the Holy House) is a shrine of Marian pilgrimage. The basilica is known for enshrining the house in which the Virgin Mary is believed by some Catholics to have lived. For centuries pilgrims would walk to Loreto and would have sacred symbols impressed on their skin using etched moulds. The symbol would then be tattooed using a 3-tipped needle soaked in ink and the souvenir from their pilgrimage would last forever. Today, Jonatal keeps the tradition alive in his studio, where he practices this ancient tradition as well as modern style tattooing with modern techniques. 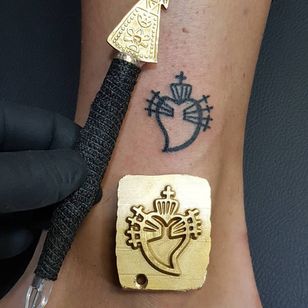 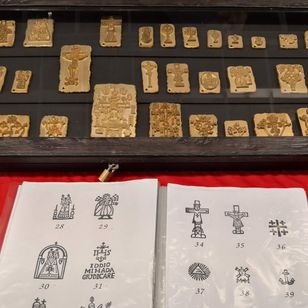 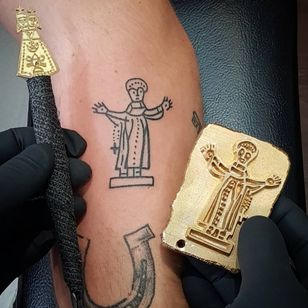 As always, an area of the convention space is reserved to art exhibitions, this year featuring artworks by artists such as Antikorpo (Andrea Lanzi), Betties Kler, Marco Petacchi, La Que Sabe, Leonardo Chiarabini and many more. And for the first time, this year a “BACK YARD” has also been set up: a space dedicated to urban subcultures, writers and freestyle, with a skate park, live concerts and Dj-sets, where art and skate contests took place over the three days of the convention.

Florence Tattoo Convention is definitely a fun and interesting convention to visit in Italy; Florence is a warm, beautiful, welcoming city, a true gem for any art enthusiast: so many reasons not to miss it next year! 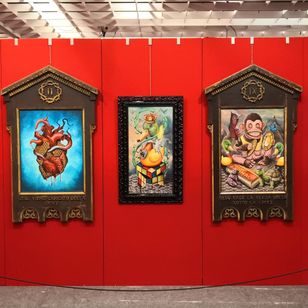 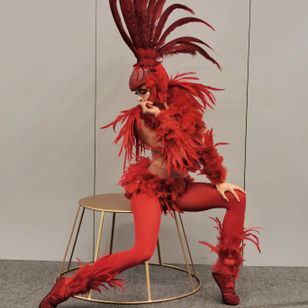 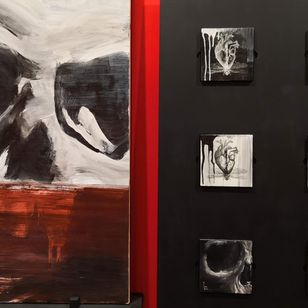 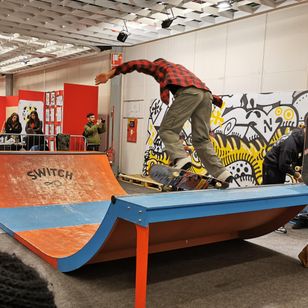 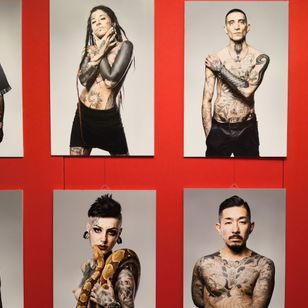 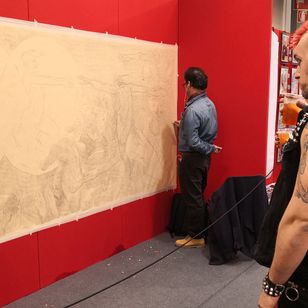 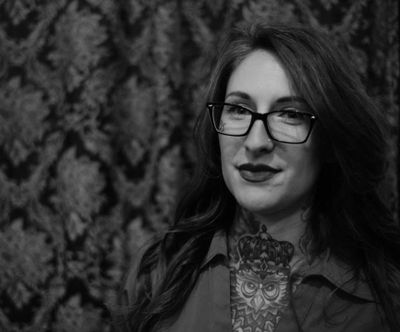 The Science of Tattooing with Hannah Wolf

Tattoo artist Hannah Wolf tells us everything about her book, The Science of Tattooing, and the importance of scientific knowledge beyond artistic skills. 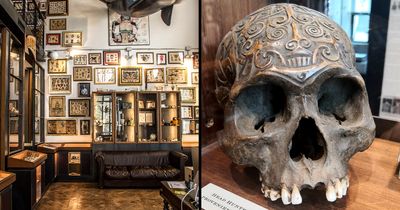 A Trip to the Roma Tattoo Museum

In this article we will take you on a journey through time and tattoo history at the Roma Tattoo Museum.