We can’t help ourselves. There’s nothing like hearing the buzz of the tattoo machine right before that stencil on your body becomes permanent. Before the buzz, the tattoo is just an idea, a concept: once the machine starts, the art itself becomes invariably real. At 10 volts and 135 cycles per second, a tattoo machine, depending on the piece, of course, can pierce the skin 8,100 times a minute. For a smaller piece, assuming 30 minutes total on the table and 20 mins of actual “tattoo” time, that adds up to 162,000 times the needles pierce the skin. The pain in the moment may be blinding but there’s nothing like looking at the fresh tattoo, now permanently etched into your body. 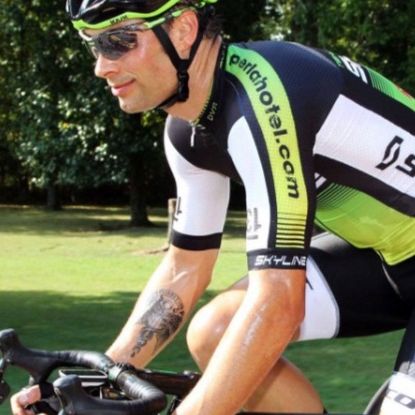 Tattoo collectors have a love-hate relationship with the needle, but at the end of the day there’s a true love for the art and craft found in the global tattoo community. Tattoos have an immense amount of power as they represent the agency of the individual who chooses to get a tattoo. The momentary pain of the needle is a rite of passage to owning one’s identity, style, and physical body. Yet there are millions of Americans who can’t say the same when it comes to “undergoing” the needle. 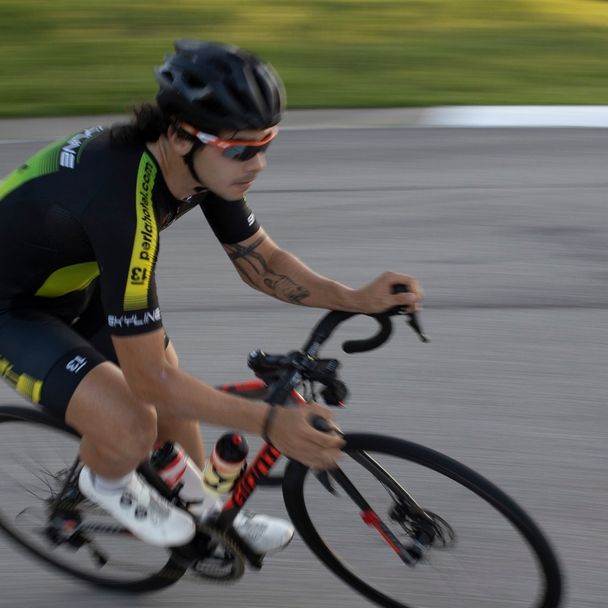 November is Diabetic Awareness Month, but for those of us who have it...it’s a daily event. I wanted to highlight the struggles of living with Type 1 diabetes for my teammates on professional cycling team, Team Skyline, and how diabetic tattoos help some people reclaim their bodies in a small way. Type 1 diabetes is a genetic disease where the pancreas can’t produce the hormone insulin, a critical hormone used to convert sugar into energy. With no insulin, type 1 diabetics can go into diabetic shock, and ultimately die if not treated in time. While no known cure exists, type 1 diabetics can manage their disease by injecting themselves with insulin to allow their body to then process the sugar consumed at meals.

“How many times a day do you inject insulin?” I asked teammate and type 1 diabetic, Justin McQuerry. He responded, “It depends dude. I inject a single slow-drip form of insulin in the morning and then generally take a dose of insulin with every meal. Some days though I can take as much as 25 doses of insulin.” 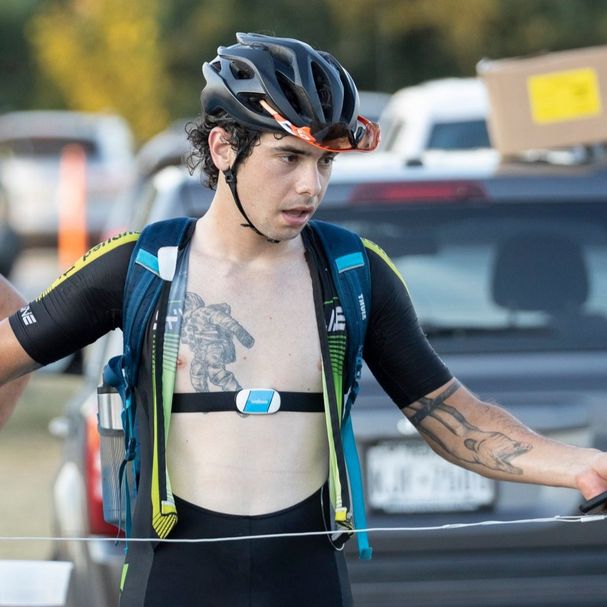 Justin McQuery, 24, is a professional cyclist living in Austin, TX, and has been diagnosed with type 1 diabetes since infancy. Since as long as he can remember, Justin has been dependent on insulin injections to simply live everyday life, let alone race bikes at a professional level. Everyday for 22 years Justin has been having to inject himself with insulin. Assuming Justin has averaged near 8 injections everyday for 22 years, this means Justin has had 64,240, and counting, injections...or enough for a small tattoo. 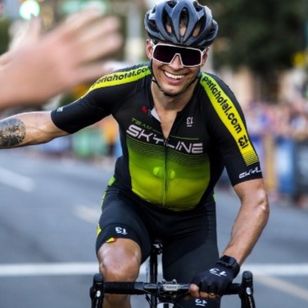 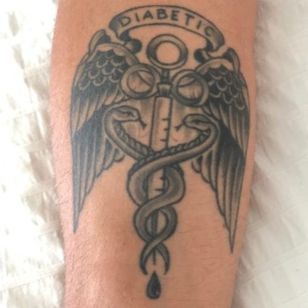 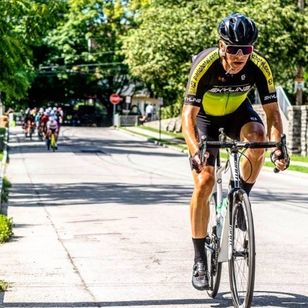 The discomfort and unpleasantries of injections aren’t momentary for diabetics; they’re the daily reality of every diabetic, often times dictating when they can and can’t do certain activities, for risk of diabetic shock, which can be extremely lethal. Justin and millions of other diabetics have their day-to-day lives dictated by their disease, injecting insulin when their body requires it. Although Justin may not have pieces that are specific to his struggle, many diabetic tattoos can not only save a life during a moment of shock, it can also help people feel more empowered through their strife. 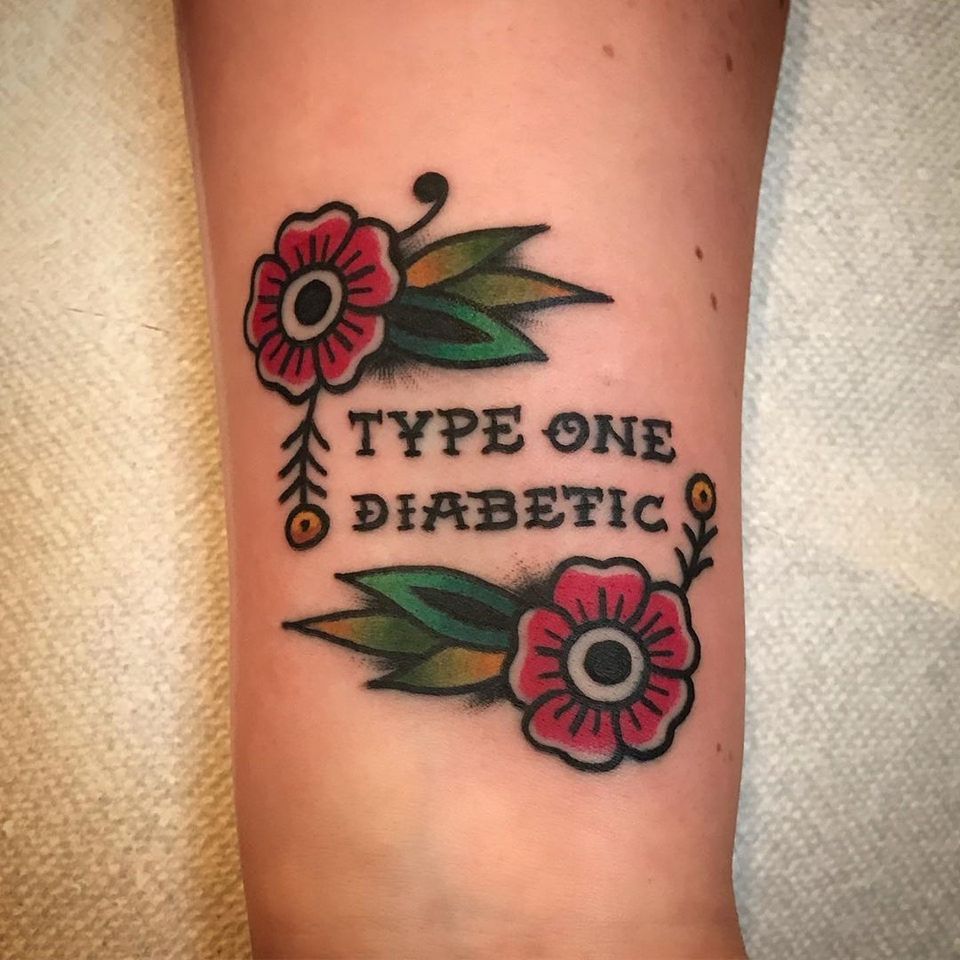 It can be extremely frustrating for diabetics to lead their lives in this manner; they live by the needle and they die without the needle. Diabetics are constantly having to inject themselves to ensure they keep an even blood sugar level to allow for sustained energy to get through the day. With so many daily injections, it can be extremely easy for a diabetic to allow themselves to think their disease as their identity; yet despite this challenge, Justin, Ryan DeWald who is the team founder, captain, and T1 Diabetic, as well as millions of other diabetics are rallying against the disease and are choosing to claim their bodies from the disease that they can’t rid themselves of. 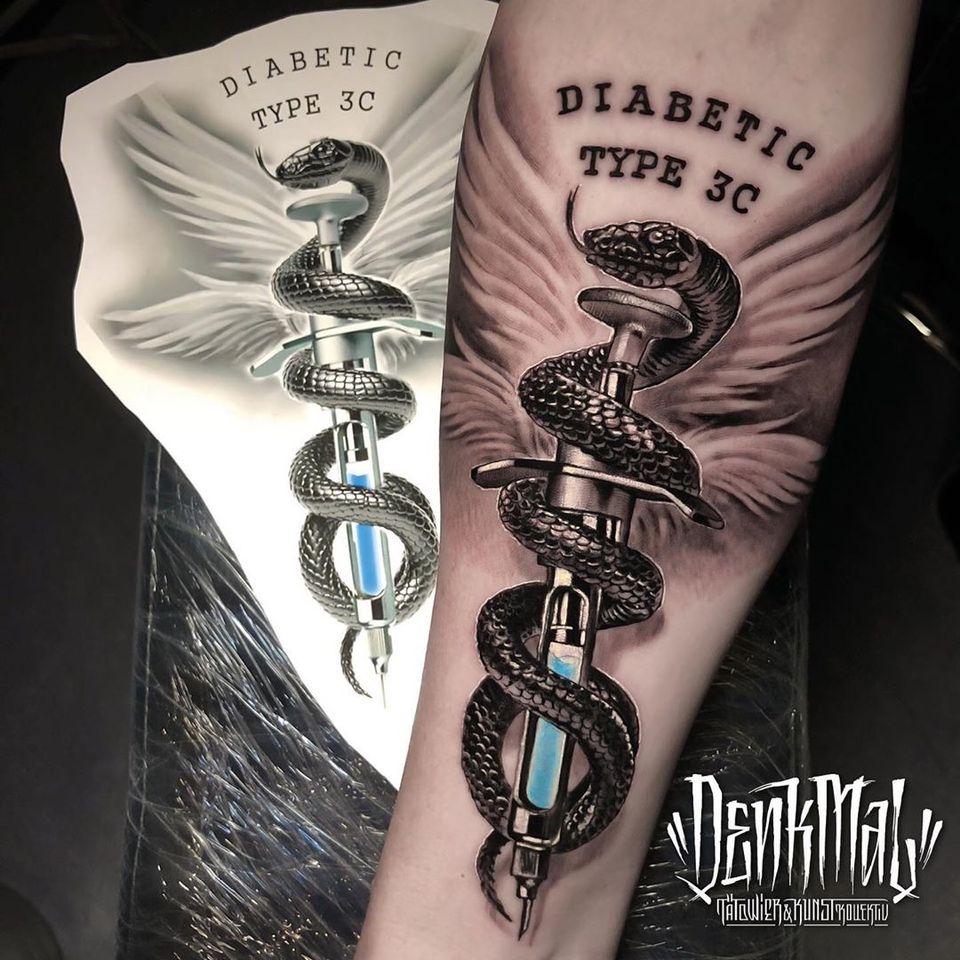 Defiance is at the heart of Justin and Ryan; it is also the mission of Team Skyline. Justin and Ryan seek to defy their disease and have chosen to rise through the ranks of bike racers around the world to compete on an international stage despite their disease. Rather than being “owned” by the disease, Justin and Ryan have decided to claim themselves and their diabetes by choosing this exceptional career path and, of course, by collecting tattoos.

Justin and Ryan have reclaimed the act of “injection” by choosing to get tattoos, permanently changing their bodies to reflect their personal style, tastes, and individuality. The needle and subsequent tattoo becomes an extension of their identity, rather than being defined by the needle and their diabetes. For Justin and Ryan their ink goes beyond being plainly diabetic tattoos; it’s a matter of bodily reclamation. 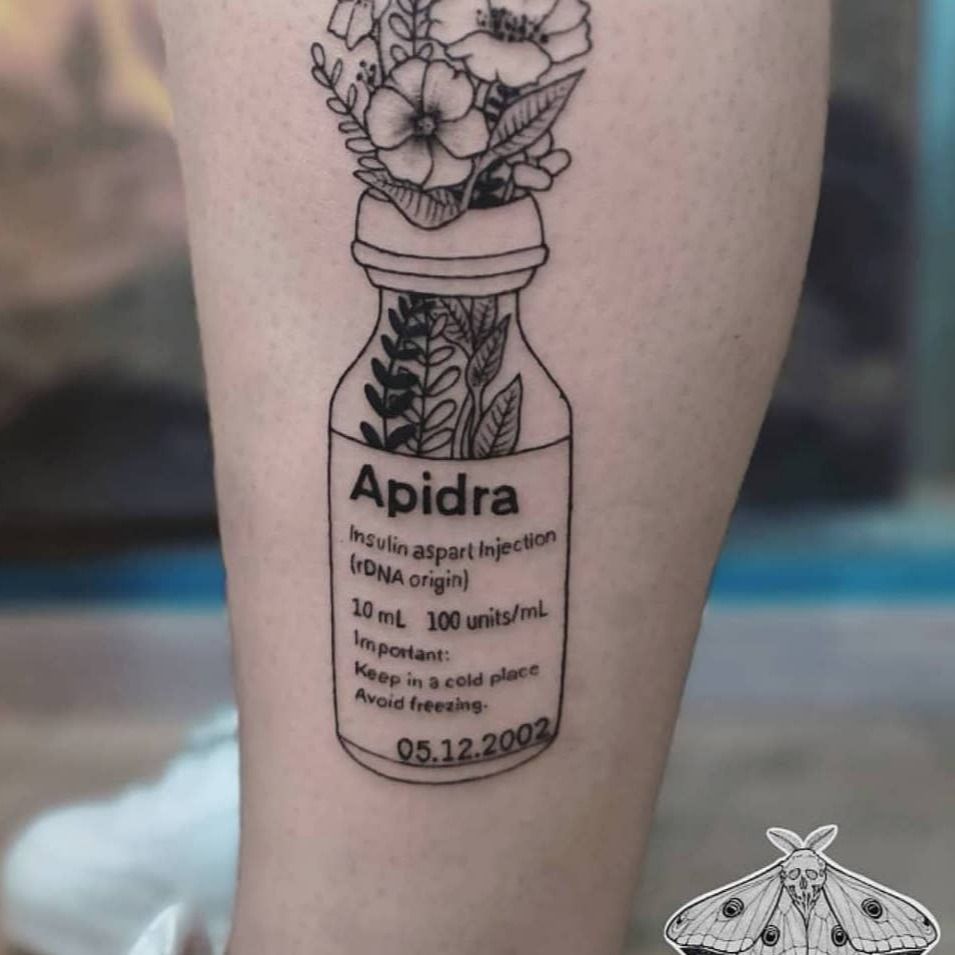 Cycling and tattoos have gone together for a long time, gracing the pro peloton on dozens of riders. The common trope of the “masochist” cyclist loving pain of course follows most of the speculations about the ink on the riders, but it offers a different understanding of the art and meaning of tattoos to see them donned by diabetics.

“I want to educate and inspire diabetics globally,” says Team Skyline captain and Winning the Race with Diabetes founder, Ryan DeWald. “I decided to take Team Skyline into the pro ranks to show the world that diabetes isn’t a terminal diagnosis. I needed a way to engage communities and what better way than through a pro cycling team?” 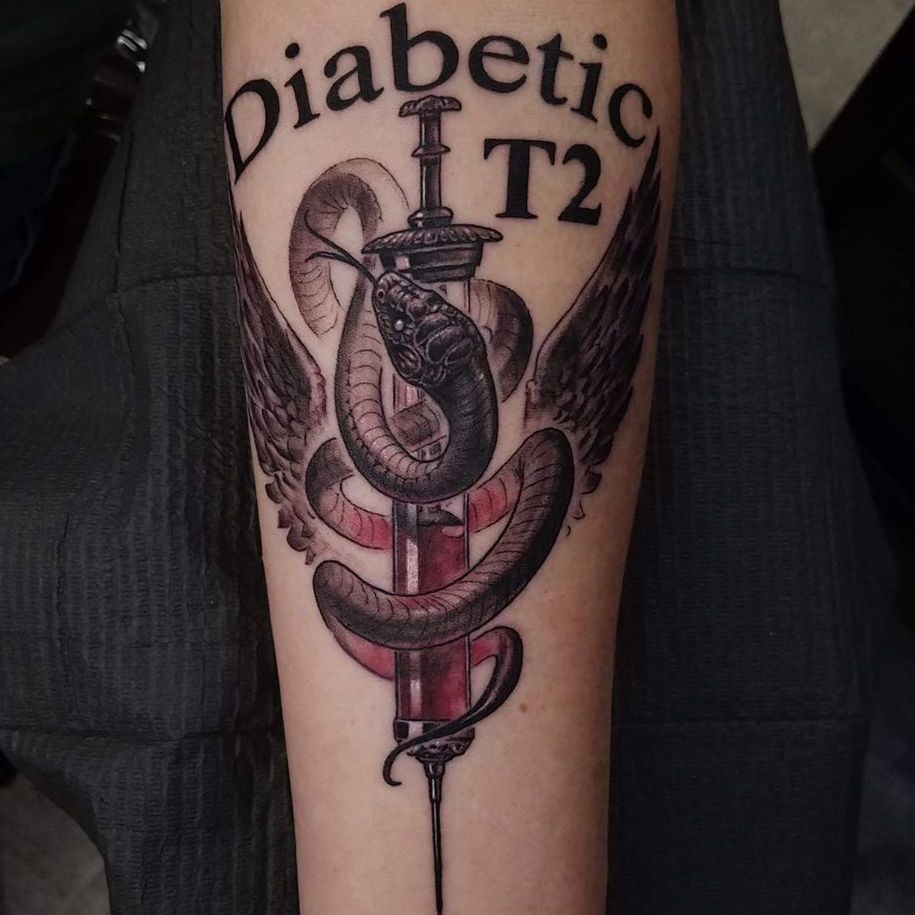 “Diabetes massively altered my life. Being diagnosed as an adult with T1D was the biggest thing to ever happen to me: it cleared out my bank account and left me scrambling to figure out how to get a grip on one of the most basic parts of a person’s life. It took time, years of struggling, and some help, but I managed to get a grip on the disease. Not only that, but I’m thriving now. I’m running a pro cycling team, racing at a professional level, all with diabetes. I guess one of the hardest parts of adult onset T1D is reconciling that the person you were, that lifestyle you led, would have to change. But I realized I’m not Ryan DeWald ‘type 1 diabetic,’ I’m Ryan DeWald, the same Ryan DeWald I have been since birth. And that’s part of the message I want to spread with Team Skyline: never feel defeated because of your diabetes. I will not stop working to help the millions of Americans to come who will be diagnosed with Type 1 diabetes to show them what support networks are available for them and to inspire them to reclaim their lives from the disease. We’re shooting for the moon right now, making plans to try to get to the Tour de France and even get legislature passed to assist the millions of diabetics within the United States.” As for Justin McQuerry, he puts it simply, “Fuck diabetes.” 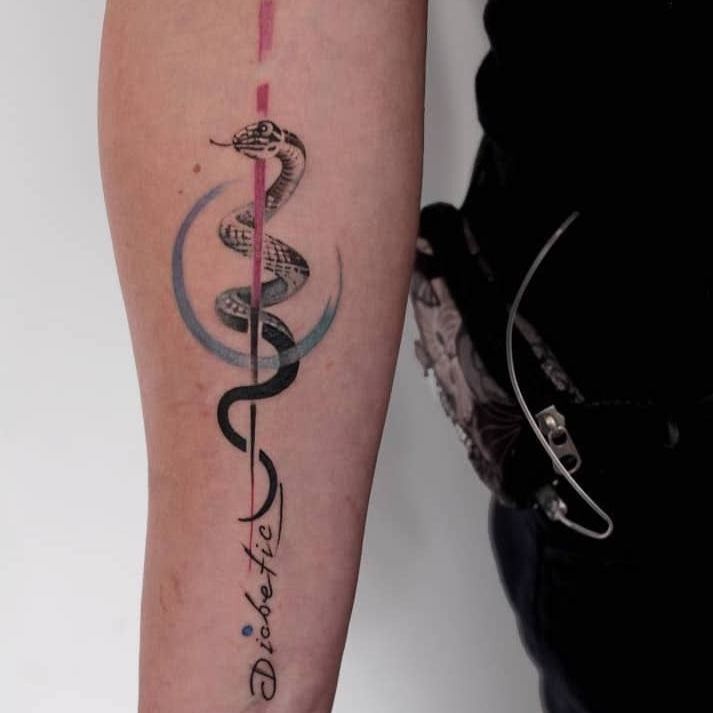 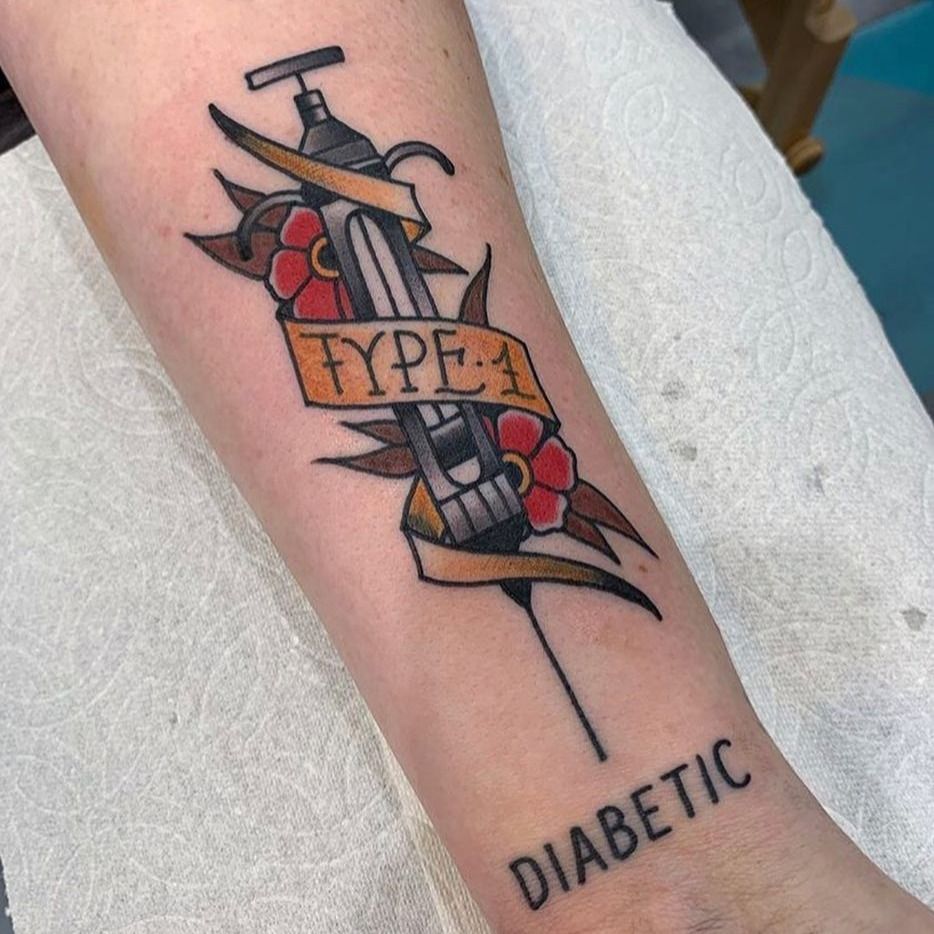