Samuele Briganti’s nautical tattoos stand out for their unrivaled boldness and intrepid color schemes, but what makes his work truly remarkable is how it holds fast to its roots. Briganti freights designs by early pioneers in the industry like Sailor Jerry into the 21st century. Here’s a brief inspection of one of his large-scale pieces to show just how he keeps the symbolism of traditional maritime tattoos afloat. 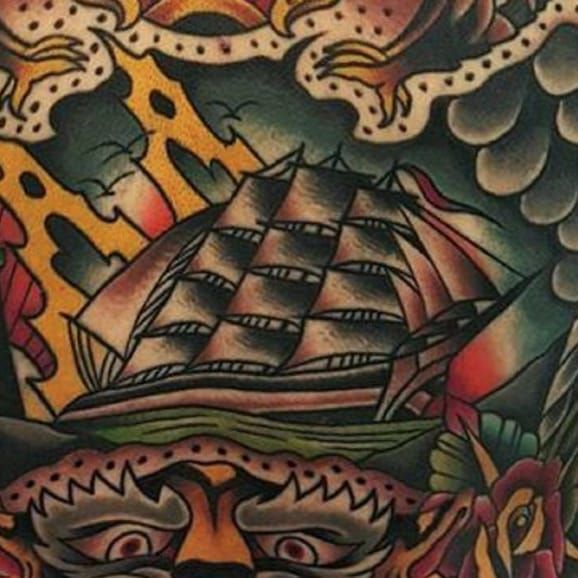 At the center of Briganti’s back-piece is a clipper, long understood to be representative of adventure and wanderlust. Beyond this loose interpretation, tattoos of ships can be interpreted as mementos of long voyages or indicators of naval service. In a more metaphorical sense, they also convey ideas about camaraderie; it’s not only the captain that goes down with the ship, after all. 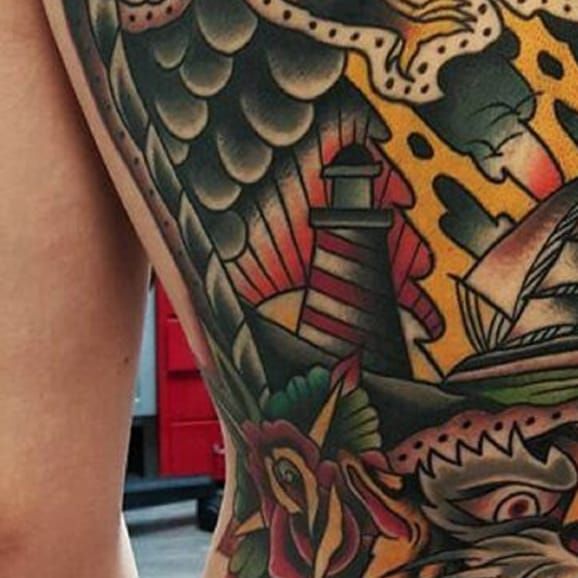 The lighthouse is one of the more hopeful symbols in Briganti’s composition. These beacons steer sailors to shore through the dark of night or, in this case, the storms in real life, so they are generally considered emblems of guidance and saving grace in body art, too. 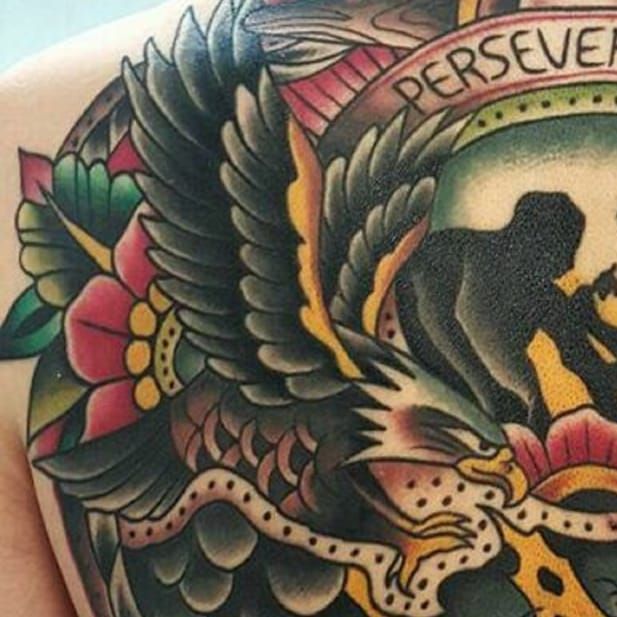 Eagles are one of the most popular motifs in traditional tattoos, because of how they embody ideals such as bravery, freedom, and power. Though these birds of prey are often associated with American patriotism (especially in maritime body art), the eagles in Briganti’s piece seem suggestive of conflicting forces in nature, given their oppositional posturing and the absence of stars and stripes. 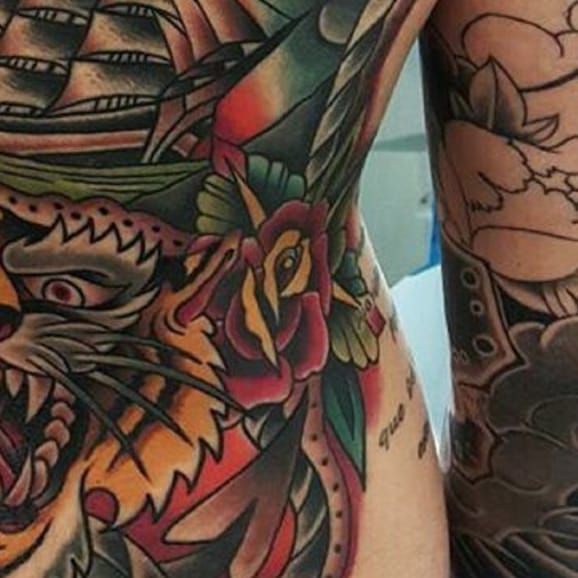 The flowers in Briganti’s back-piece can easily be misread as just beautiful space-filler, but the nautical context makes them so much more. A red rose is typically associated with notions surrounding romantic love, but when considered from the perspective of a lonely sailor, it becomes a symbol of both devotion and heartache. 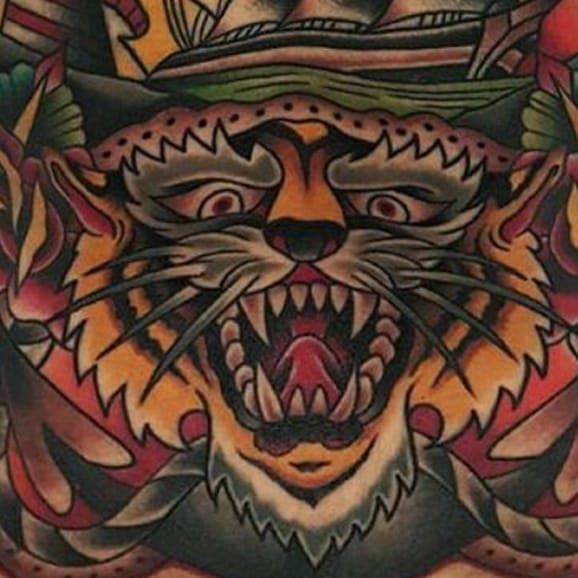 The anchor with one of Briganti’s tiger heads at its crown is one of the most complex figures in the back-piece. Anchors are symbols for stability, while tigers represent the natural world in its rawest form. By merging these disparate icons together, Briganti creates a paradox that perfectly encapsulates the experience of being a sailor. We can grow sea legs, but there’s no arguing that the ocean was never meant to be the domain of men. 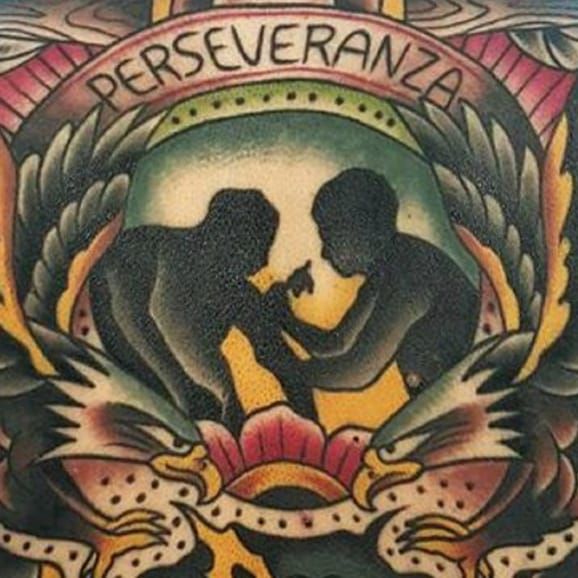 The silhouette of a tattooist working on a client implies a significant amount of self-awareness on Briganti’s behalf. He developed his take on the traditional style by studying the work of legends such as Bert Grimm and Owen Jensen, who helped import maritime motifs into the 20th century body art. These gestures toward his predecessors show his reverence for the heritage behind the art form. This portion of the piece also reflects the global scale of the shipping and tattoo industries through the word “perseveranza,” which translates as perseverance. 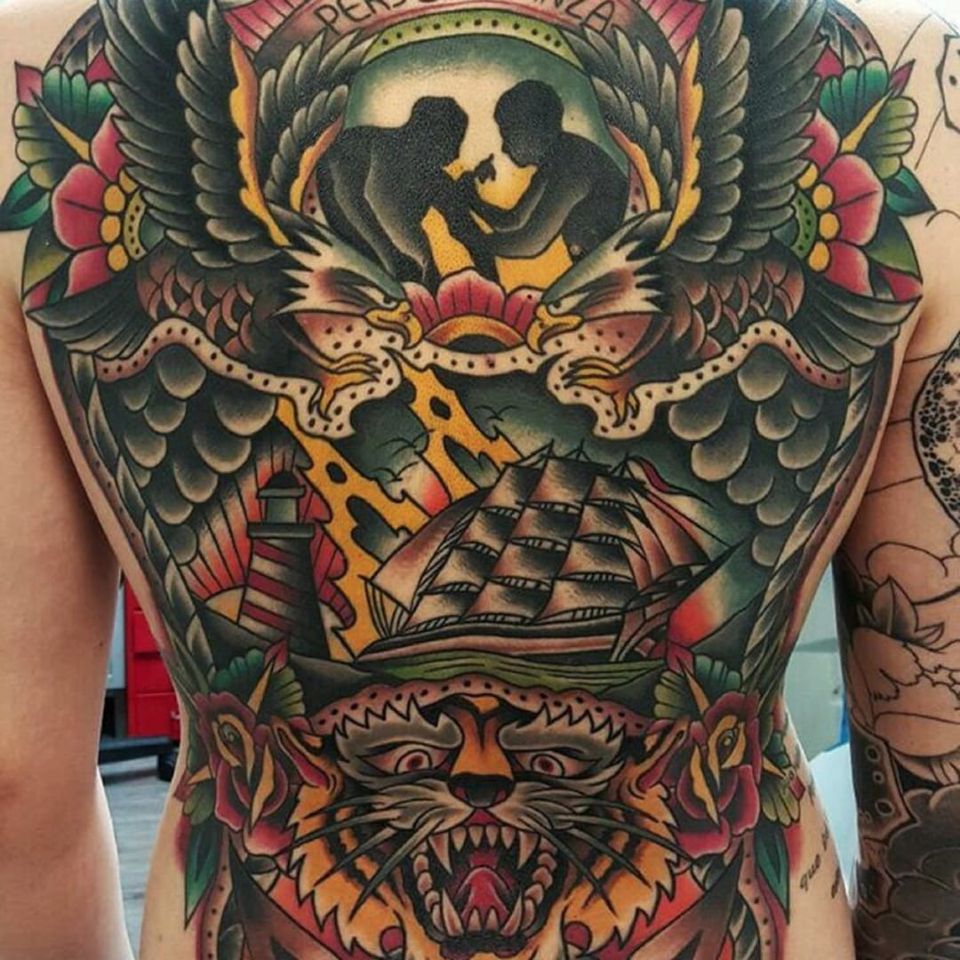 Briganti’s creation captures the essence of life on the high seas. It is filled with iconography that mirrors mankind’s adventurous impulse to brave the elements in the name of enterprise and discovery. In short, it epitomizes the come-hell-or-high-water attitude that made traditional tattooing what it is today.