Florian Santus is one of the best practitioners of traditional American tattoos in France. He produces wonderful depictions of some of the most time-tested motifs to have ever graced the world of body art. Though all of his bold and colorful work is stellar, his lady heads stand out because of their stunning beauty. His illustrations of gorgeous women have the power to make you swoon, so grab a hold of something before continuing on for fear of falling head-over-heels in love with these knock-out babes from his superb portfolio. 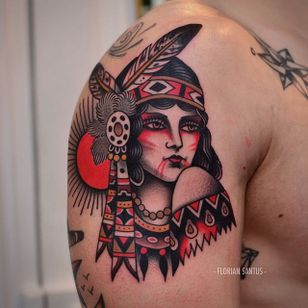 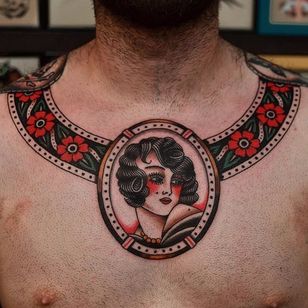 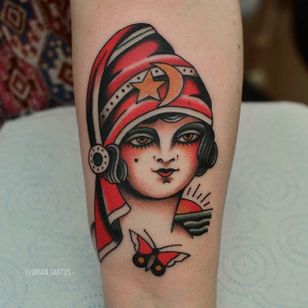 "Old-timers like Cap Coleman, Percy Waters, and Ben Corday are my favorites," says Santus in an interview with fellow traditional tattooist Javier Betancourt. You can see these early tattoo pioneers' influence in his work, but as demonstrated by the lady heads, his take on the style also sets itself apart from its predecessors. His work is notably elaborate for this genre of tattoos. For instance, the rich texture of his ladies' hair is astounding, and just look at the amount of detail in some of their apparel and other accompaniments, like clothing and objects, too. Also, his approach to traditional body art is brilliant in terms of chroma. He employs primary color palettes to create striking moments of contrast in each of these pieces. The gypsy girl with a butterfly on her headscarf is a fantastic example of just how vibrant his work is. 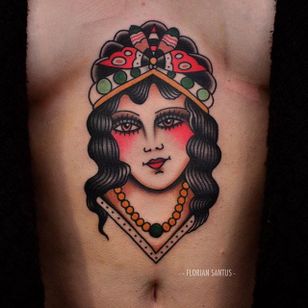 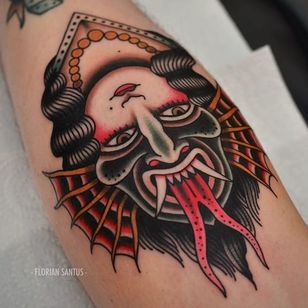 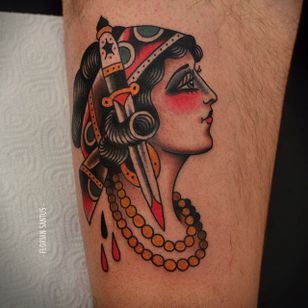 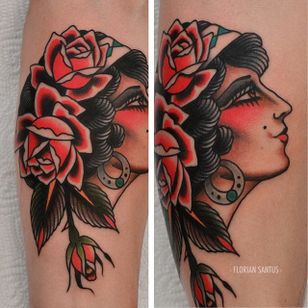 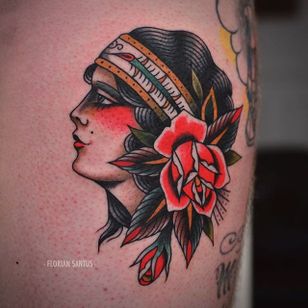 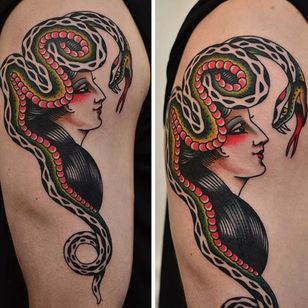 One of the best aspects of Santus' babes is how he dresses them up. He has a penchant for illustrating all sorts of themed female figures. Here, there are several gypsies, a Native American, and even a trippy two-faced demonic lady head. He not only puts them in costumes, he also pairs them with other striking iconography, such as daggers, snakes, and roses. Speaking of these ruby red blooms, he's done numerous depictions of beautiful women with his signature floral designs. His roses, for as common as a motif as they are in the world of body art, are some of his most unique imagery. The detail of their leaves and the pronounced appearance of their heavily saturated petals makes them stand out from the crowd, especially when nestled into his ladies' black tresses. 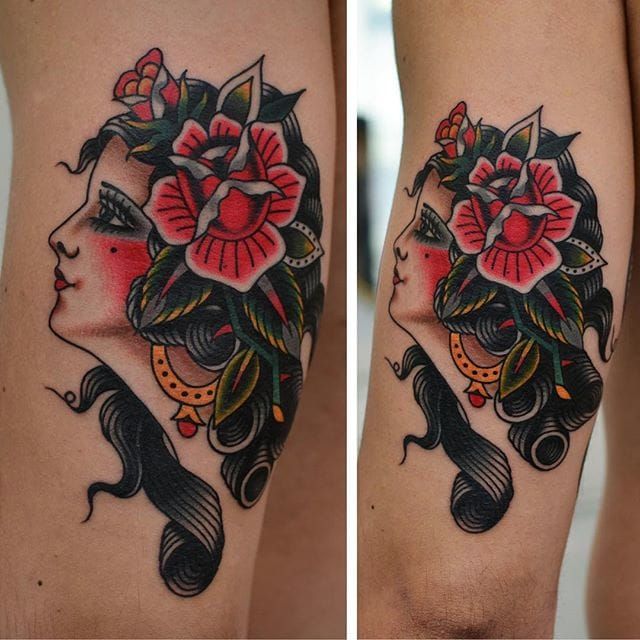 A gorgeous lady head with a rose in her hair by Florian Santus (IG—floriansantus). #FlorianSantus #ladyheads #roses #traditional

If you want to get lost in the beauty of more of his traditional tattoos, head on over to Santus' Instagram. He works out of a private studio in Paris, France and can be contacted at florian.santus@gmail.com for appointments should you want to get some body art from him.