Back in the 1950's a weird Belgian cartoonist named Peyo, presumably fueled by a psychedelic cocktail of some sort, created a universe populated by bizarre blue humanoid entities that live in a village comprised of structures built from mushrooms. It's pretty odd, but honestly, most cartoons are pretty odd.

That all seems pretty innocent, but there are some aspects of the Smurfs universe that should raise a few eyebrows.

For one, Gargamel, the villain, is portrayed as having a hook nose and an insatiable lust for gold. That's not all that sketchy by itself, because most villains are fueled by avarice, and a gnarly hooked nose isn't necessarily a correlation toward unwarranted stereotypes of Jews once perpetuated by the Nazis. It does get a little more questionable when you realize that his companion, a cat named Azrael, is known as the "Angel of Death" in Hebrew....

It should also be noted that Smurfette, the object of desire for every virile male Smurf, is blonde haired and blue eyed. Okay, maybe that's another style choice. But then there's the "Black Smurfs", who are rabid, zombie-like creatures that wreak havoc on the Smurf village. Draw your own conclusions if you want. We're just gonna lay out facts.

So now, 60 years or so later, there's a new Smurfs movie in theaters, Smurfs: The Lost Village. Apparently it's about boys learning to respect girls. That seems like a pretty important task being that there's literally, like, one female smurf. I can't even imagine how much catcalling goes on in Smurf village. The sexual tension must be exhausting.

To celebrate the release of this sure-to-be classic, we've compiled some of the weirdest and best (and worst) Smurf tattoos out there. 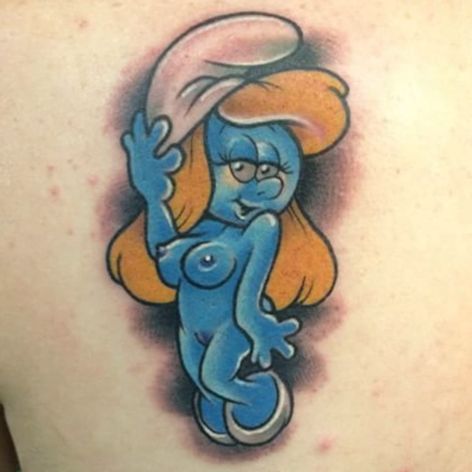 Maybe you hate yourself. Maybe you're mildly intoxicated. Maybe you're just a huge fan of tiny blue men and the sexualization of one singular female character. But I'm sure SOME of you are going to see Smurfs: The Lost Village.