Traditional Japanese art is not just ghastly dragons, graceful koi, and deities surrounded by threatening waves. It is also fraught with cute little animals, humor, and beings, of all shapes and sizes, lounging around while enjoying the finer things in life...like sake and sashimi.

Pulling inspiration from the likes of the infamous Edo Period paintings of He Gassen, a scroll depicting a farting competition, as well as Chōjū-Jinbutsu-giga which when translated literally means 'Animal-person caricatures', Wendy Pham creates works of art that are filled with vivid colors and exhilarating energies. Her sushi cats, ramen rabbits, and chopstick holdin' pups are immediately recognizable through the attention to detail, personality and flair for style that Wendy wields with absolute adroitness. 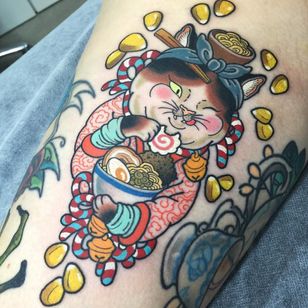 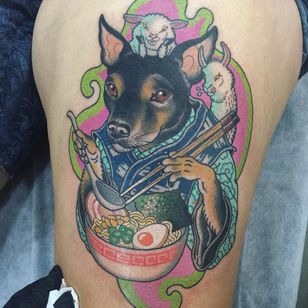 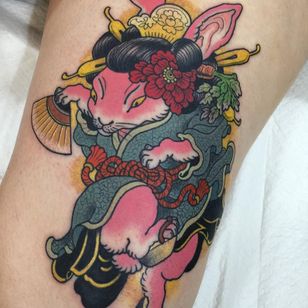 What was your childhood like? Were you always creative and was tattooing always your career of choice?

I was always drawing when I was a child. My poor mum and dad had to deal with crayon drawings all over their walls and magazines.. I vandalized books at school with my scribblings too. I just wanted to draw where I wasn't allowed to. When I was in Primary school I spent all my time copying Sailor moon drawings. I think thats where my inspiration originally came from. I dreamed of being an animator when I was young. 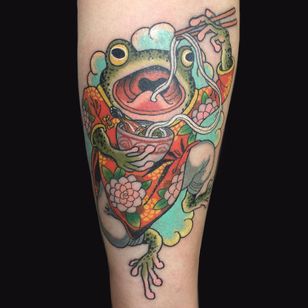 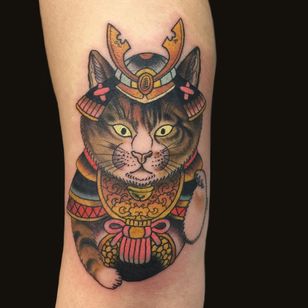 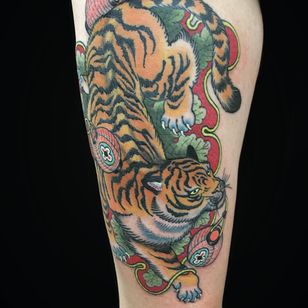 I read in an interview that you said, “I think art is like a sandwich- it always seems better when someone else makes it.” which is basically genius and so incredibly accurate sometimes. Who are your sandwich makers? What artists, films, books, or philosophies inspire your work? Who are your heroes?

I’m laughing at myself now for saying that. My sandwich makers are illustrator Gojira Ishihara, animator Hayao Miyazaki. I love animated movies- by Walt Disney, Miyazaki, the Alien movies and H.R. Giger were a huge inspiration during my goth days. Thats just naming a few, I could go on forever.

I’m not sure if I follow any philosophies for art, I kind of make my own. I just believe in hard work, lots of practice and critiquing yourself harshly. I guess thats why I never like my own sandwich.
My biggest hero is my dad. He is a really creative thinker and I was amazed by his drawings when I was young. He doesn't make art for a living, but I wanted to be like him- to be able to take on a project and do my best and think outside the box. I think it’s important to have inspiration from people who are not artists too. When you make art for a living it changes your thinking. It makes you rigid, overly cautious and a perfectionist- especially in this time where everything you do is judged on Instagram etc. These pressures can really kill your creativity and imagination. 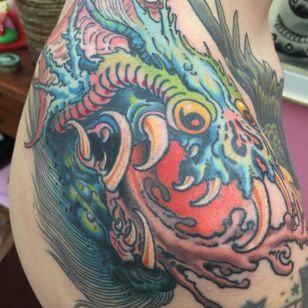 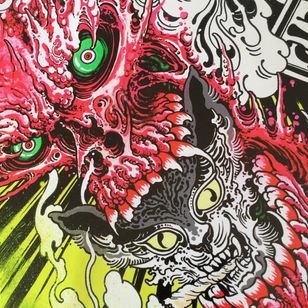 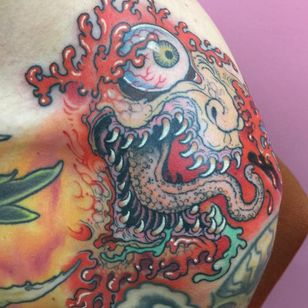 What was it like opening up your own shop? What are the pros and cons of taking on the extra responsibility of shop owner?

It was scary at first especially because I don't speak German and I’m unfamiliar with the rules here. My friend just told me to take on one thing at a time, and its not so scary. At Taiko Gallery we have three artists- Guen Douglas, Markus Lenhard and myself. It’s more like a communal working space rather than a shop where there is a boss and employee situation. I think the hard part of having your own shop is managing other people- and I don't have people who I employ so its a lot easier I guess. 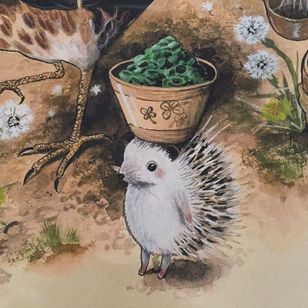 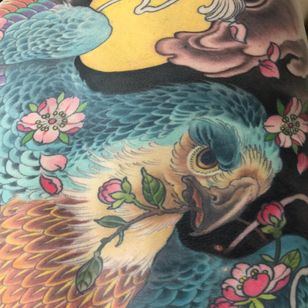 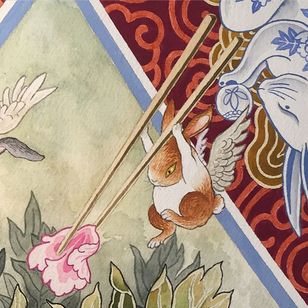 I am definitely guilty of being obsessed with tattoos of Japanese styled animals holding food, which includes a large portion of your portfolio. Why do you think people are so crazy about tattoos that blend animals, food, and Japanese patterns? What is it about your work that makes it so powerful and how do you infuse your characters with such personality?

Food has become a hobby and a passion for a lot of people and not just something to keep you alive. We are very lucky that way.
Historical Japanese art showed a lot of anthropomorphic animals and thats what a lot of clients give me as reference, so I make my own version of them.
I really like to express each animals personality when I draw them and give them a lot of expression. I want to give them a purpose and a background story when I draw them because it makes it exciting to come up with fun ideas. I like to make people feel excited when they see my work. Art shouldn't always be so serious I think. 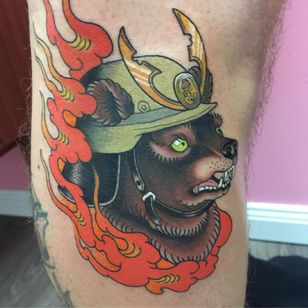 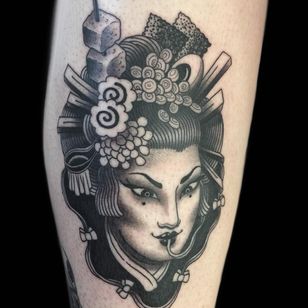 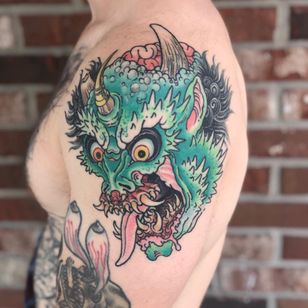 How does the locality of where you live and work affect your art? How does Berlin’s tattoo community contrast with Australia? What is your favorite place in the world?

Berlin and Australia are totally different in terms of tattooing. Theres a different focus on whats ‘in’ at the moment. Berlin is about blackwork, neo traditional and stick-and-pokes done at home. Australia is a bit more broad with the styles. Australians love colour tattoos more than Berliners. I haven’t lived in Australia for 5 years so maybe it’s changed, I don’t know.
My favorite place in the world for tattooing would be Canada probably. Canadian clients are so nice and so open minded. 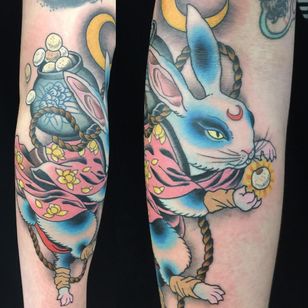 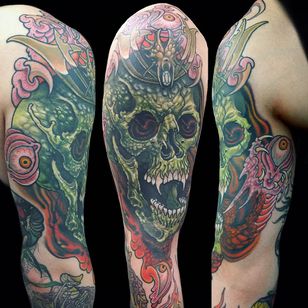 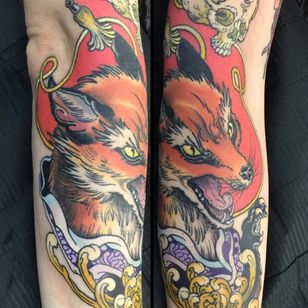 Your cover for Things&Ink was described as purposely “androgynous” makes me wonder how you feel about being female in a, generally, male oriented industry. What has your experience been like, and do you think gender has played a role?

When people say it’s male oriented I always hear the argument that “there are a lot of women tattooing these days” and that is true, but it’s not about the numbers, but more the recognition. Domination is about power. There is a number of highly regarded artists, I hesitantly use the word ‘elite’, in the industry and not many are women- not because we aren’t good enough, but because not many have been allowed into that circle. We have to remember that there was a time in history where women weren’t even allowed to make art. It takes a long time to change the patriarchy, it still exists in all industries. We are currently fighting for equality but mentally it will take time for men and women to see each other as equals.

Theres definitely a lot of judgement towards women in the industry- that we use our appearance or sexuality to gain popularity. Although that may be the case for some, it then gives people the idea that all women who are successful have had a career boost from simply being female and not from hard work. What people don't think of is that being pretty doesn't help you as an artist. It can boost popularity on social media but thats all. Men can get bitter about women having more opportunities because of their gender but I think it’s really the opposite. It is also quite demeaning to be given opportunities because you’re filling the female quota. On the other hand some people overly support women in tattooing because they think its cute or sexy, which I find extremely patronizing. 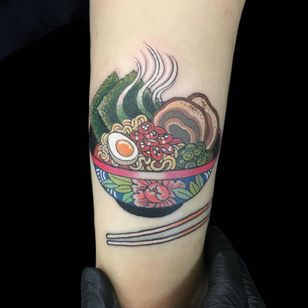 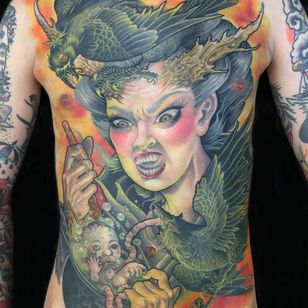 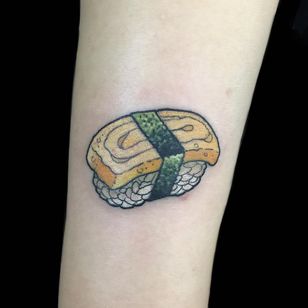 I tried to give the theme an androgynous feel for the Things and Ink feature because “Identity” was the theme. I am female and I am an artist, but those are separate things which don't affect the other. I don't want to be judged for my gender first. I have a purposefully neutral alias on Instagram, @wenramen, so my art can make the first impression. When you look at art the first thing you think about shouldn't be whether it was done by a man or woman. It doesn't matter. Like if you go to a restaurant and have food cooked for you , you don't worry about if it was cooked by a man or woman you just judge it by the taste. Here I am comparing art to food again haha! These are just personal opinion and experience of course. There are other things that artist feel discrimination for in the industry- for example being LGBTIQ , your race. Theres so many things that affect you in tattooing that people don't think of if they are not in the position of that person. I’m hoping that through talking about it we can learn and be a more understanding community.

What do you hope 2018 has in store? Any events, travel plans or projects you’ve got in the making?

I really hope to make another book. I’m still thinking of ideas. I want to paint more, travel less, as I already travel so much for work, and hopefully getting more lovely open minded clients who like my weird ideas. 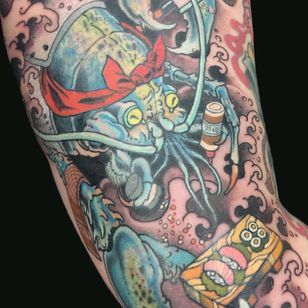 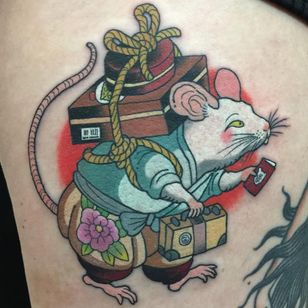 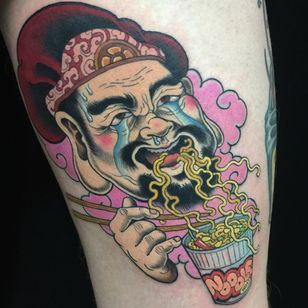