A man of many interests, layers, and concepts, in this interview Joao Bosco talks about his upcoming album The Cult of the Serpent, and his new book with Tiger Sword. Deeply passionate about the esoteric and ancient aspects of tattooing, and culture in general, Joao gravitates towards the authentic symbolism that has traveled with our lives, throughout time. 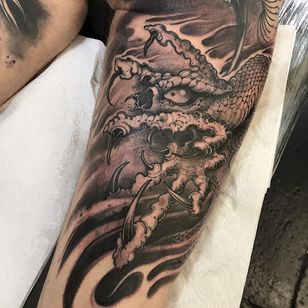 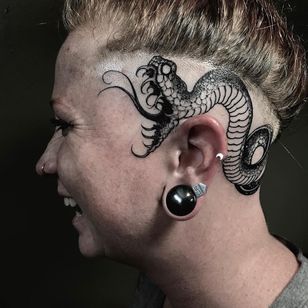 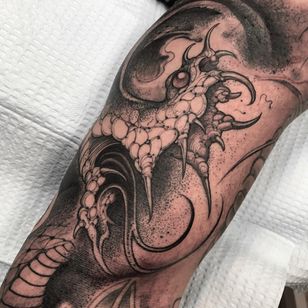 Can you tell us a little bit about Tiger Sword Official and what the philosophy or mission is behind it?

Tiger Sword is a small publisher enterprise, with the mission to bring the prime of art publishing material with a special dedication to presentation and quality. I often have seen so many amazing artworks done by high end artists printed on a very poor material and layout design, I believe that great artwork deserves prime printing material and nothing less.

Another Tiger Sword mission is to inspire others and have a positive impact on peoples lives. Once upon a time, as a young lad, I had my life changed by the artwork of comic books, and I'm here now doing what I do due the power that art have on people. I truly believe and live by that statement.
What can we expect from the newest edition of the book series? How do you plan for these tomes, and what is the process like in creating them?

The sequel is the last volume, the final chapter, there will be no more printed artwork on these subjects. My goal was to contribute, with my interpretation, on motifs that have been part of not only tattoo culture throughout the years, but also, part of sub pop and rock underground culture. The sequel has a little bit more focus on the image of the snake, in comparison to the first book. However, the skulls and chrysanthemums are there too. 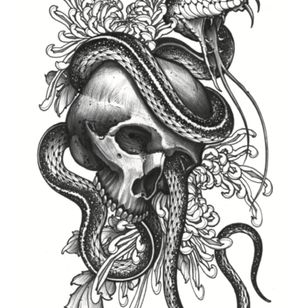 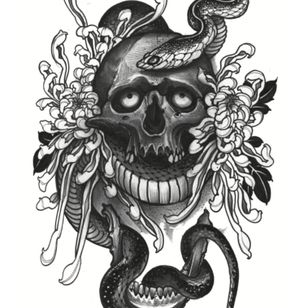 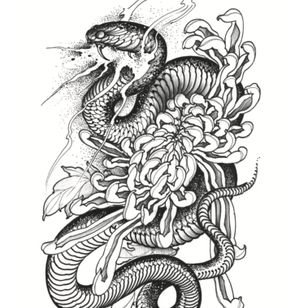 You’re also coming out with a new album that was highly inspired by serpents and the iconography, mythology, philosophy, and power of the snake in general. Can you talk more about the research behind the album, and what drew you to such a powerful animal and symbol?

I did intensive research on materials and documents regardless the image of the serpent as an object of cult. And right in the beginning I was sucked in into a realm of curiosity, facts, myths and folklore that blew my head off. There are countless hours of studying made by renowned writers and historians about this theme. I personally engaged myself into countless hours of reading and watching materials related. The serpent is, after the Sun, the oldest symbol of worship known by men, not only in classic and developed civilizations like ancient Egypt, but also among other tribes and groups across the entire globe. What drew these groups to revere the snake as an Idol, and why was this symbol a common choice? These questions are by themselves beyond inspiring and exciting. 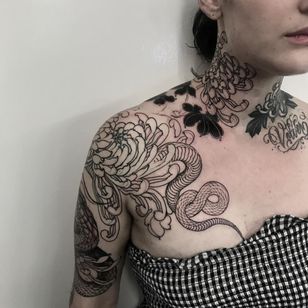 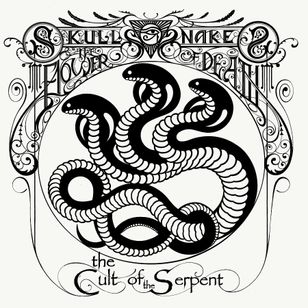 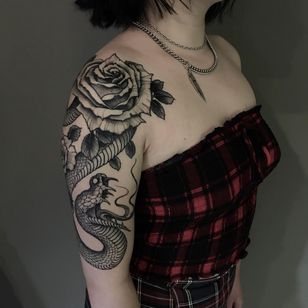 The album is highly emotional, multi-layered with different types of sounds that seem to stem from many different cultures...what was the process in creating this album? Was it highly collaborative? How did you infuse it was such passion?

As there are traces of serpent worship around the ancient world, revealed by history, I came to a conclusion that the music should be equally global and diverse to identify and represent this unique fact. I also felt the urge to eliminate the worlds from the music, no lyrics, I envisioned an instrumental album. Sometimes, lyrics play a role to specify a language, an ethical group, race or credo in my opinion. It has to be global, no boundaries or flags, and neither one style, but at the same time, condense all music style and genres. World music in its essence. With that in mind, I invited the music producer, and a close friend for many years, CatRio to participate in the creation. He got hooked up with the concept straight away and engaged into the composition of this project.

Although we were convinced that we wanted an instrumental album, we felt the need for a female chant to create the ambience that we wanted to portray. Then we found a heaven sent singer, Bombay born, Los Angeles resident, Kamini Natarajan. She really took our music project to a higher standard, and in my opinion she is the high light and star on this project.
On lead guitars we invited Tiago de Moura, ARMORED DAWN from Brazil. The Mastering was made on the notorious Fascination Street Studios in Stockholm , they have worked with high calibers Heavy Metal bands like DIMMU BORGIR, IN FLAMES, SEPULTURA, OPETH, POWERWOLF and so forth.

The Music is progressive, atmospheric, ambient, heavy and more than anything, very dense and very dramatic! To be fair, I cant recall anything similar. It's a very unique music album. 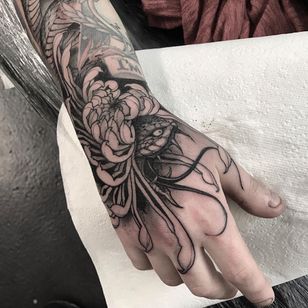 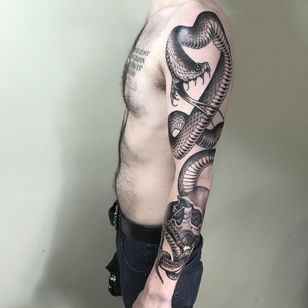 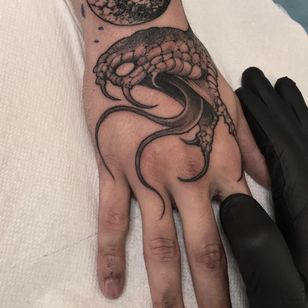 There seems to be a tentative dualistic relationship between life and death in much of your work, not only within the music, and books, but also within the design motifs you tattoo. What draws you to these concepts, and what is your philosophy surrounding death?

Death, more than anything, is nothing but a question mark in existence, which triggers so many emotions, fascinations and quite often disturbance in the human soul. Clearly, we don't know enough about it, and it doesn't seems like we're having any progress on our attempt to solve this puzzle. My belief behind my artwork, I think, is that some, or most of us, may be dead even if we are thought to be alive, whilst some others, can still be alive, even though they are long dead. I guess that everybody dies, but only few people live. That is the message on my art.

You’re an incredibly busy artist, consistently working on several projects at once. Where do you find the motivation? What keeps you going?

I can't picture any other way of living. I actually find pleasure and purpose in life in the battle as opposed to the conquered. Once the album and the book is out there, I will be empty again, back to zero. The achievement ain't nothing but emptiness. To run, to hustle, to fight, only there you will find fulfillment, only then you realize what it means to live. 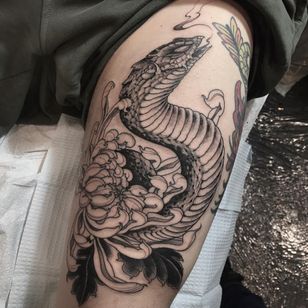 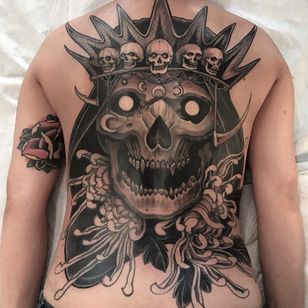 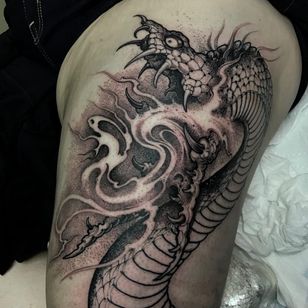 What do you think is the impetus behind your skill set being so multimedia? What is it about each medium that fulfills you, and are they mutually exclusive, or do they each support each other? Do projects like the book and album inspire or support your tattooing?

Yes, you said it right, they support and fulfill each other. I see it as a documentation. A way to turn my artwork timeless for future generations that will come after me. I don't rely on social media or anything that is virtual. I use them and think they are truly essential and beneficial. But I don't see them as timeless. I think they could vanish into oblivion in a blink of an eye. I believe that books and music stays no matter what. Once I stumbled onto a Greg Irons Book. He was a tattooist before my time, and there would be no way of getting to know his work if it hadn't been documented in a form of a publication. I'm truly grateful to the ones that had the initiative of making that book. In the same way, I hope to reach a generation that will come no matter what. I won't be able to remain to present to them what I have made, my skin and bones will go back to dust. Therefore the book and the music is a way to talk, not only to my generation, but to dwell in the future. Hang on!! Am I talking about time traveling now? Oh MY MY !! hahahahah 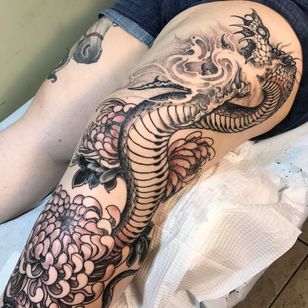 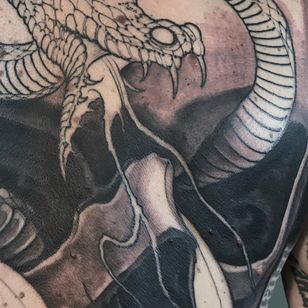 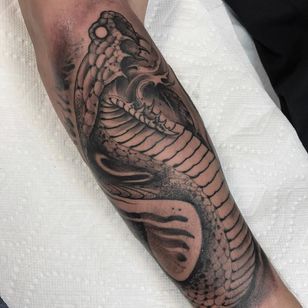