It was 11:30 on a Friday morning in Chinatown and passersby could not stop staring at the crowd outside of Daredevil Tattoo. People from all over the country were huddled together trying to stay out of the cold breeze eagerly awaiting the moment that they had all been anticipating — the unveiling of the Friday the 13th flash sheet. 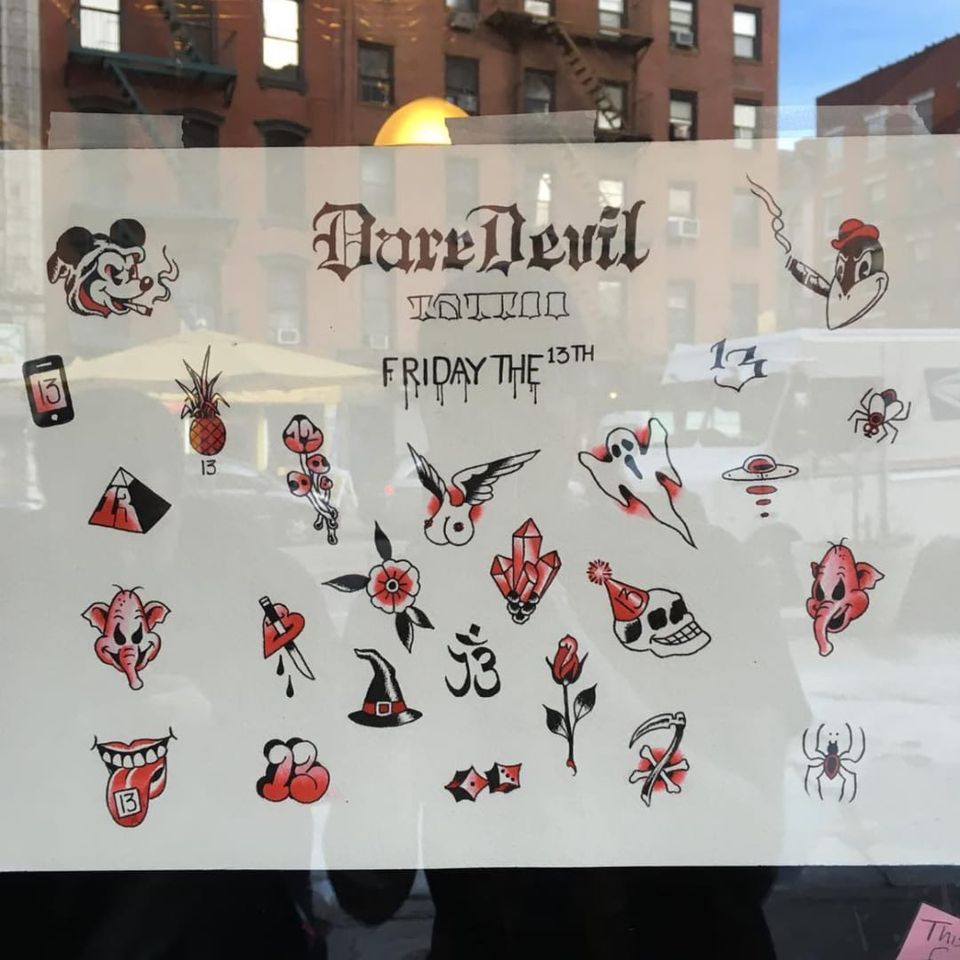 The flash sheet drawn by Skribs specifically for one day only. (Via IG - skribs94) #daredevil #FridayThe13th #flash #traditional

Since 2003, the crew at Daredevil have been opening their doors every Friday the 13th and kicking it old school as they charge $13 (with a $7 tip for good luck) for a small tattoo off of a special flash sheet drawn specifically for that day. This time around the flash was provided by Skribs, one of the shop's many talented artists. Michelle Myles, co-owner of Daredevil, loves that the day is a bit of a flashback to a time when the tattooing industry was very different from what it is now. “I feel like it gives us a little taste of what it would have been like back in the day, when you walked in, picked something off the wall, and that’s what you got,” Myles says. “Back when they would have an assembly line of tattooers working. Nowadays tattoos are so expensive, but this goes back to that time where a broke kid can still come in to Daredevil and get a cool tattoo. It’s just a fun thing to do.” 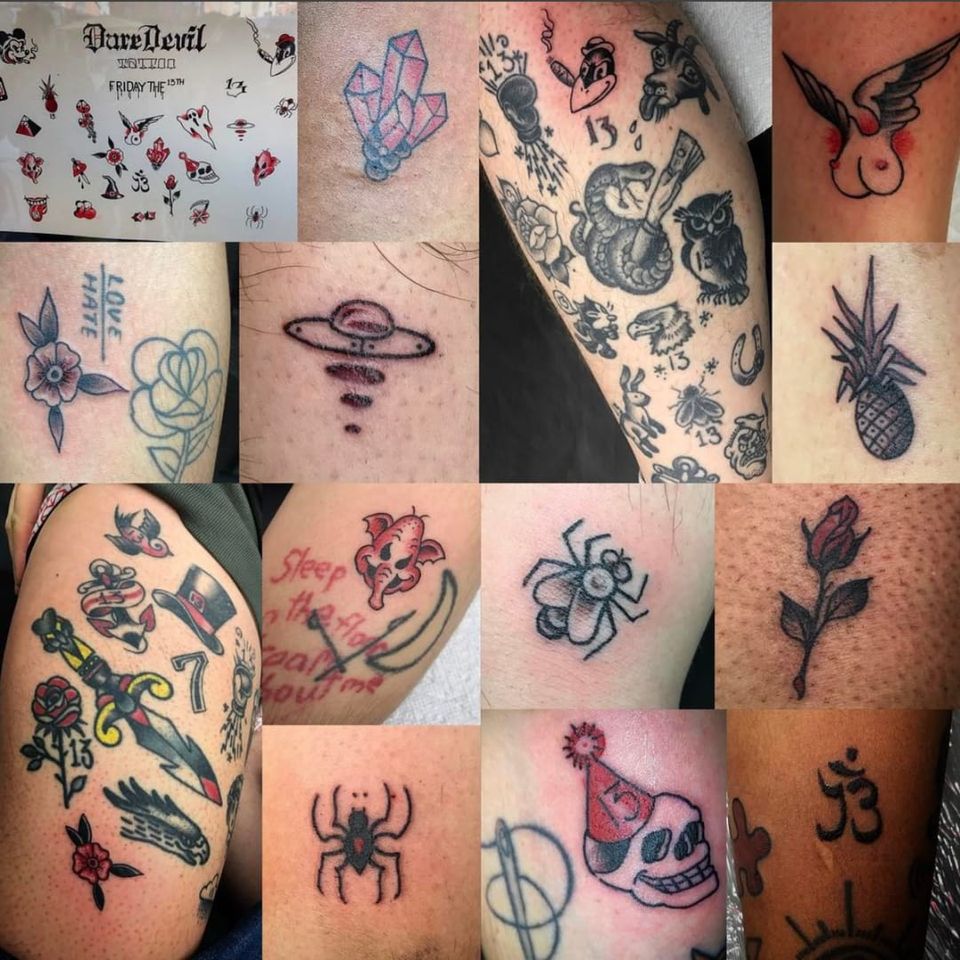 A collection of tattoos from the day. (Via IG - daredeviltattoo) #daredevil #FridayThe13th #flash #traditional

One of these families, the Korunows, has been making a pilgrimage to Daredevil every time the special day comes up on the calendar for the last four years. “Stephanie [her daughter] brought me on my 50th birthday because I was born on a Friday the 13th, so that was my first one, and we’ve been doing it every Friday the 13th since then,” Alyssa Korunow says. “Some of us, all of us, none of us, you know it’s been different combinations, but everybody is now honorary Korunows for the day.” What started as a special birthday present has grown into so much more as Alyssa will be making some trips on other days of the week to work with Myles on an elaborate knitting inspired pattern connecting all of her Friday the 13th tattoos. 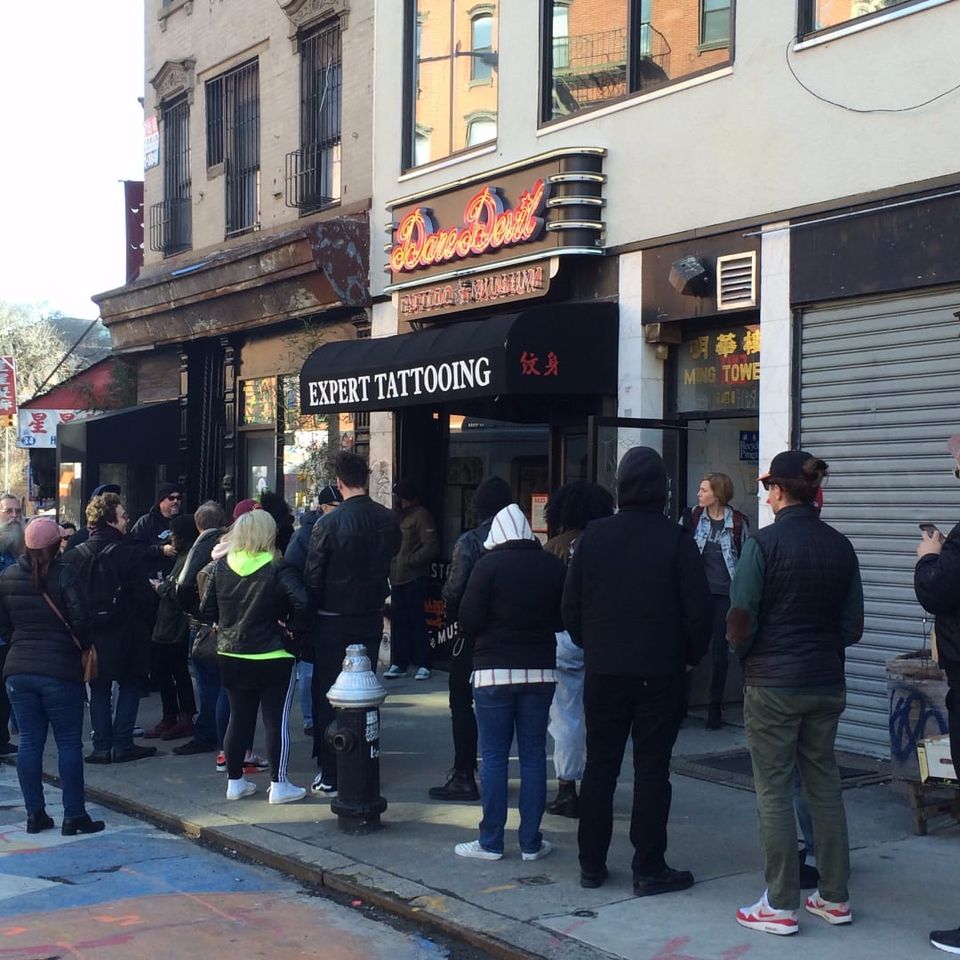 Seconds before the madness begins and the sheet gets thrown up in the window. (Photo by CharlieConnell) #daredevil #FridayThe13th #flash #traditional

“It’s totally fun, but man it’s a lot of concentration and it’s just one person to the next,” Myles says. “I feel like by now we have everybody really well trained. Everybody comes in and they know what to expect now, and we have a good system. I feel like it makes the shop more organized in general, and not just for Friday the 13th. And as a tattooer, after Friday the 13th all of us tattoo a little faster. It just makes you more efficient, it’s like a shot in the arm for your tattooing.”