TL,DR: What are Ouroboros Tattoos?

The ouroboros — the image of a snake or sometimes a dragon or a lizard eating its own tail — has been growing, shedding, and consuming its own skin since the dawn of history. It first appeared as a hieroglyph in Egypt but swiftly wound its way to other cradles of civilization. Now it’s one of the most recognizable symbols known to man. Over the course of thousands of years, the serpent has become representative of numerous themes, including introspection and the act of creation, but it’s most commonly seen as a metaphor for the never-ending cycle of life and death in the universe. Because of its profound symbolism, the ouroboros inevitably slithered into the world of tattoos.

The meaning of ouroboros tattoos is eternity, the circle of life, continuity and wholeness.

The Meaning of the Ouroboros Symbol

The ouroboros is one of the oldest mystical symbols of the world. Its names originates from the Greek word "Oura" meaning 'tail', and "Boros" meaning 'eating'. The ouroboros symbol represents birth, death and renewal - the infinite cycle of Life. It can be interpreted as Life enveloping itself; where the past (tail) appears to disappear, but it is actually moving inwardly/outwardly to a new reality - vanishing from sight but still existing. The same goes with how we perceive time, where we believe a year holds a total of 365 days before it refreshes into a new one. Generally speaking, due to its circular form, the ouroboros has been associated with several broad concepts gravitating around time, life, death, continuity & self-sufficiency.

Awesome trivia: The mathematical symbol for 'infinity' was derived from the ouroboros. 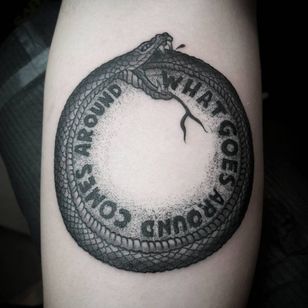 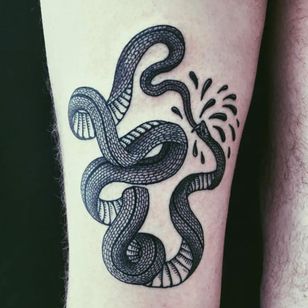 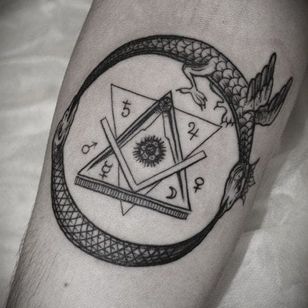 The Origin and History of the Ouroboros

The earliest known depiction of an ouroboros comes from a funerary text discovered in the tomb of Tutankhamen. The image features two serpentine beasts with their tails in each other’s jaws, locked in a circular pattern. Egyptians believed this insignia to be emblematic of the beginning and end of time, and of creation through destruction. The design was frequently featured on jewelry and other forms of portable fine art, which enabled it to incubate in other cultures along trade routes. 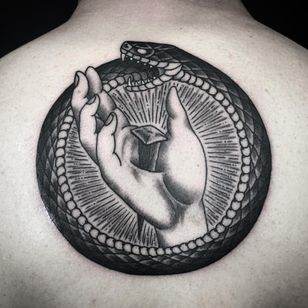 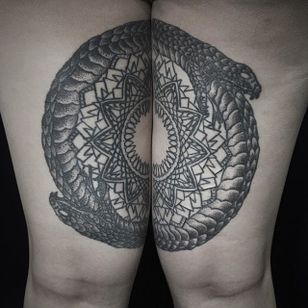 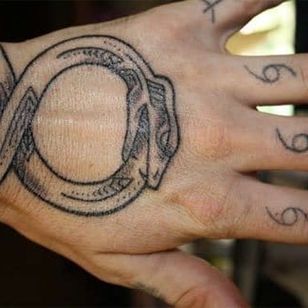 Extending from the Greco-Roman world, the ouroboros was adopted by various cultures throughout Europe, becoming associated with gnosticism and alchemy along the way. The most famous example of the dovetailed serpent in its alchemical form is from the Alexandrian text The Chrysopoeia of Cleopatra - written in the 3rd Century by a female philosopher and alchemist going under the pseudonym of Cleopatra the Alchemist - which contains drawings of a half-light half-dark ouroboros to illustrate the dual nature of things, which surrounds the Greek phrase for “one is all.”

In Plato’s Timaeus, a passage describes the first living being as an ouroboros, using the motif to express Timaeus’ theory of the self-sufficiency and perfection of the cosmos.

The ouroboros was also adopted into Norse Mythology as the physical embodiment of Loki’s son, Jörmungandr, the great snake, who is said to have grown so large that he encompasses the entire planet. 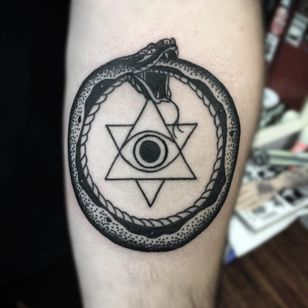 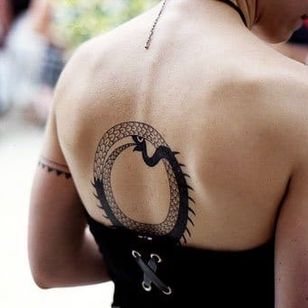 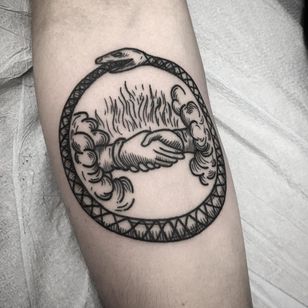 The Ouroboros as a Tattoo

In the realm of tattoos, the ouroboros is depicted in a variety of ways. Some artists twist its body into shapes like the infinity sign, while others keep it in the traditional circular design, but position other symbols and iconography at its center. Regardless of the different ways the ouroboros devours itself in body art, the self-cannibalizing snake is always evocative of the notion that everything is inextricably connected and will inevitably come full circle. 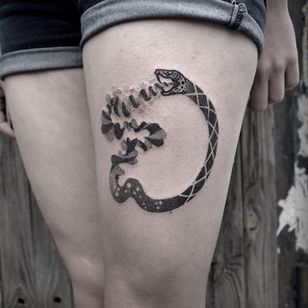 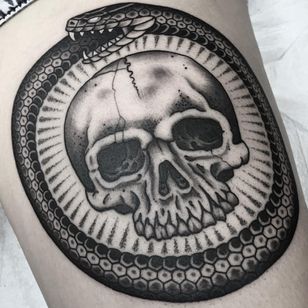 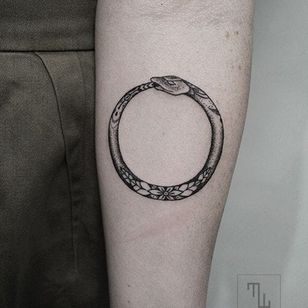 For more ouroboros tattoo ideas, download our app, search and get inspired by hundreds of designs! 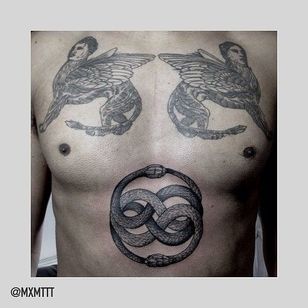 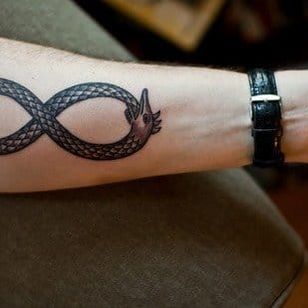 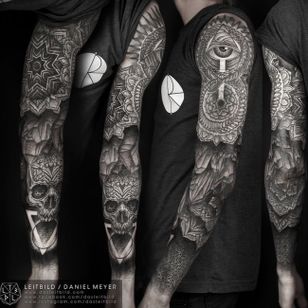 You’ve just experience Deciphering the Sacred, our series where we unpack the meaning of various symbols from the world of tattoos. We hope you liked learning about the Dharma Wheel and how it leads to enlightenment. If you want to learn about more meaningful figures, check out our other posts on Unalomes, Metatron’s Cube, Sri Yantra, Dharmachakras, and The Flower of Life. 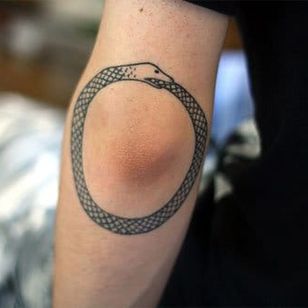 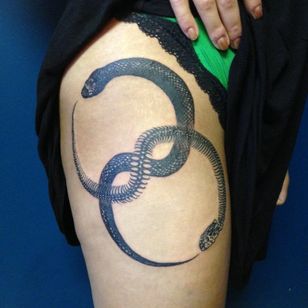 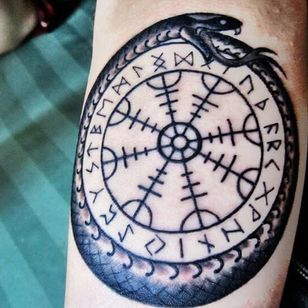