Sailing down the Fjords, the Northmen and Women were hardy seafarers, fierce fighters and incredible craftspeople.

Did they actually have tattoos though? It is widely considered fact that the Vikings and Northmen in general, were heavily tattooed.

However, historically, there is only one piece of evidence that mentions them actually being covered in ink. 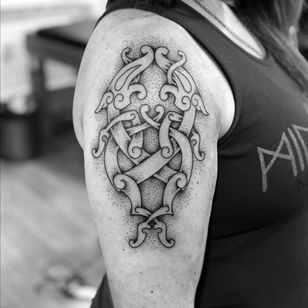 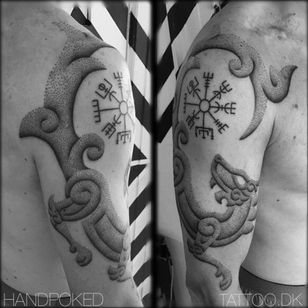 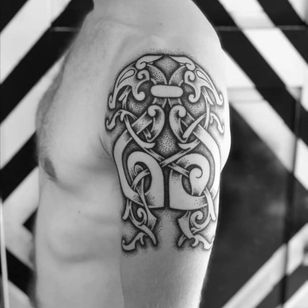 Did Vikings Have Tattoos?

So, how do we know if they actually had tattoos? The simple answer is, unless there is a discovery made of an intact Viking, which includes their skin, we will never know one way or another.

There are clues those, clues that can help us decide for ourselves whether we think these formidable adventurers, were in fact inked. 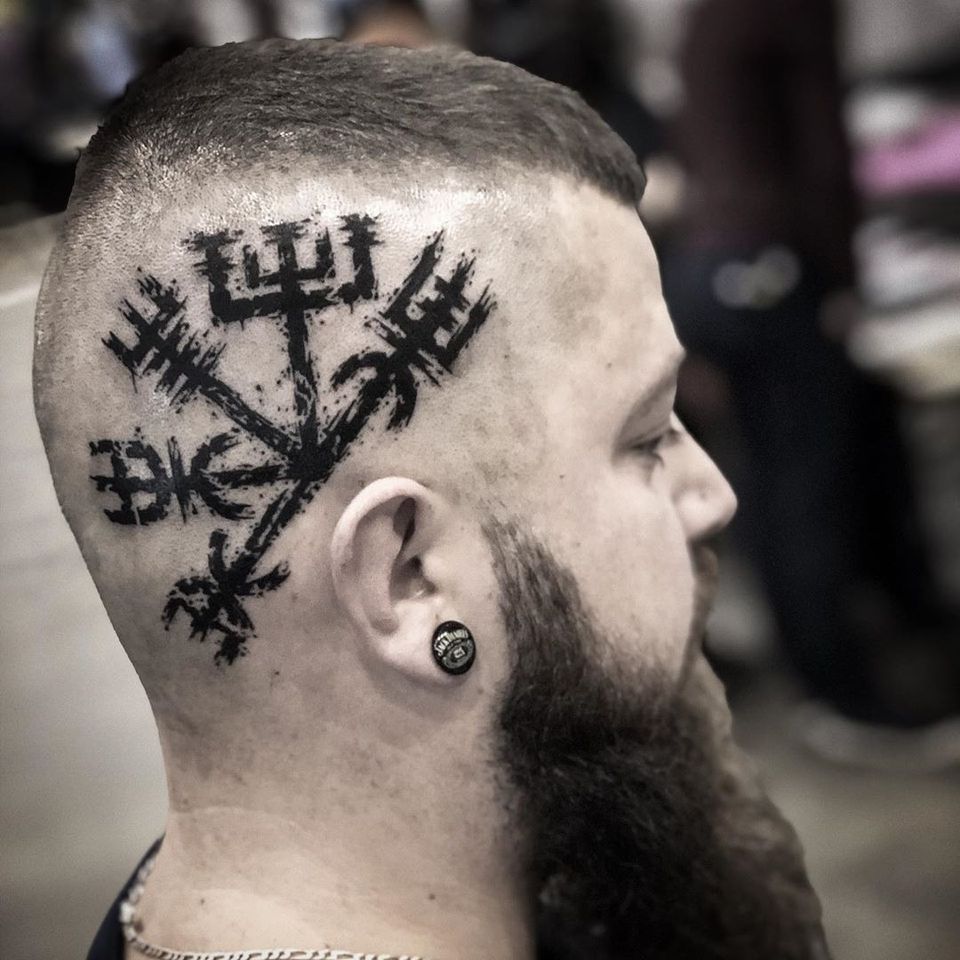 Our first and most important clue is the account from Ahmed Iban Fadlan in 921 AD. An Arabic scholar, Fadlan was sent by the caliphate to Middle Volga, part of what is now Russia.

Whilst there he came across a group of Northmen and it is here that we have our only account from history to say that they had any form of decoration on their skin.

‘As tall as palm trees, fair and reddish, they wear neither tunics nor caftans. Everyman wears a cloak with which he covers half of his body, so that one arm is uncovered. They carry axes, swords and daggers and always have them to hand. They use Frankish swords with broad, ridged blades. They are dark from the tips of their toes right up to their necks - trees, pictures, and the like.’ 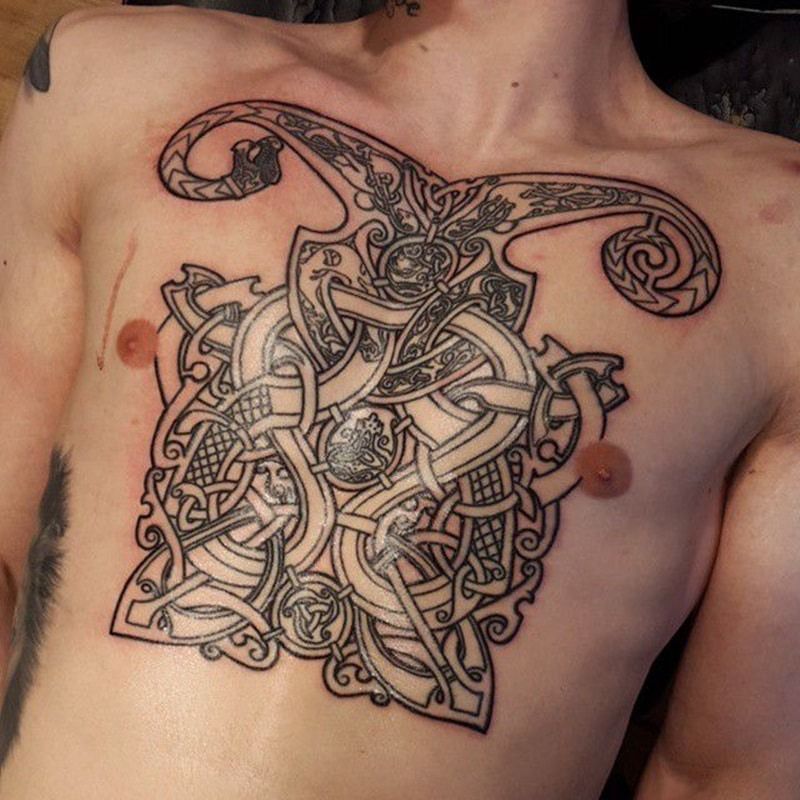 Historians seem to generally accept, that this account by Fadlan would indicate that the Vikings were indeed tattooed.

Why are there no other recorded accounts? The Northmen and women were not known for keeping written records of their history, most of what we know today is what was handed down orally, this not only means that a lot is lost to history, but also what we do have, much is impossible to translate.

Fear not though as we still have a few clues to explore. 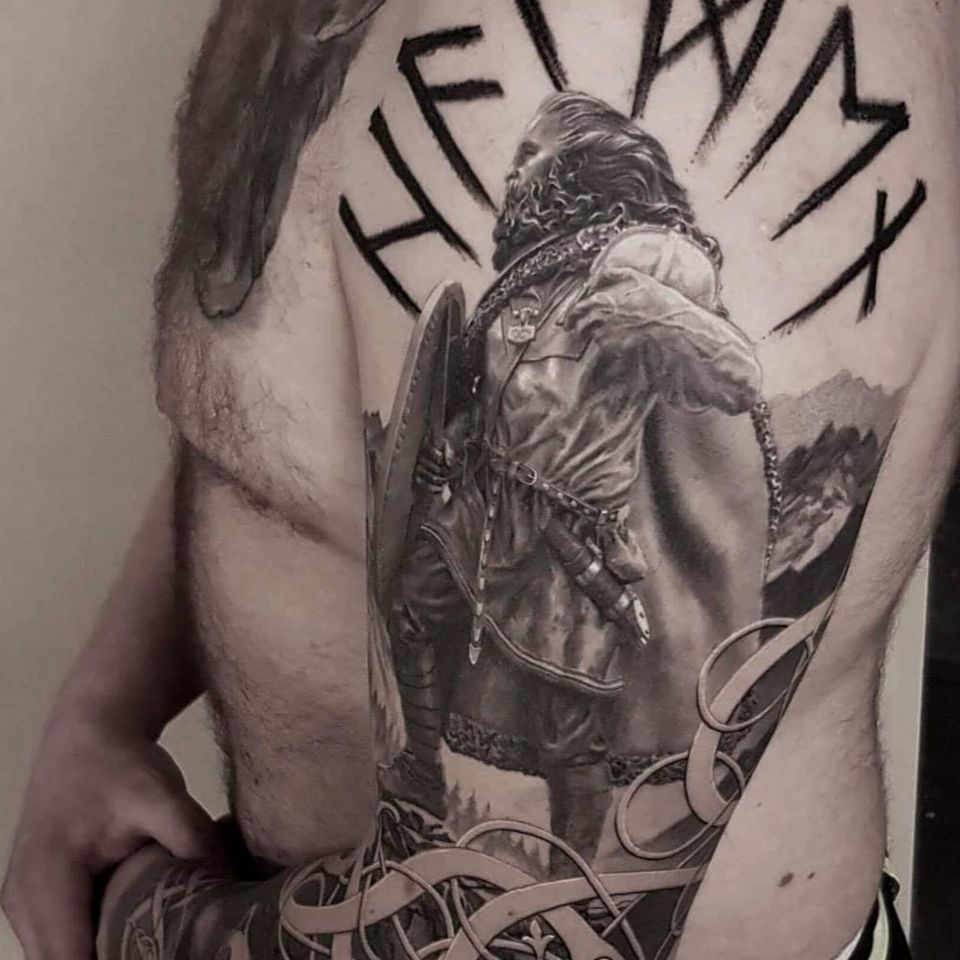 Another Arab writer, Al-Tartushi wrote that both the Northmen and Women wore eye make up, most notably eyeliner.

This is important as it does show that the people from this era were comfortable with adorning their skin with marks. Now these may well have been temporary, rather than permanent tattoos.

There are references to the faces being painted during rituals, with either blood or ash used to create an ink that was dark blue in appearance, again not permanent, but still further evidence that the skin was marked in special ways.

It’s still not outright confirmation though, is it? 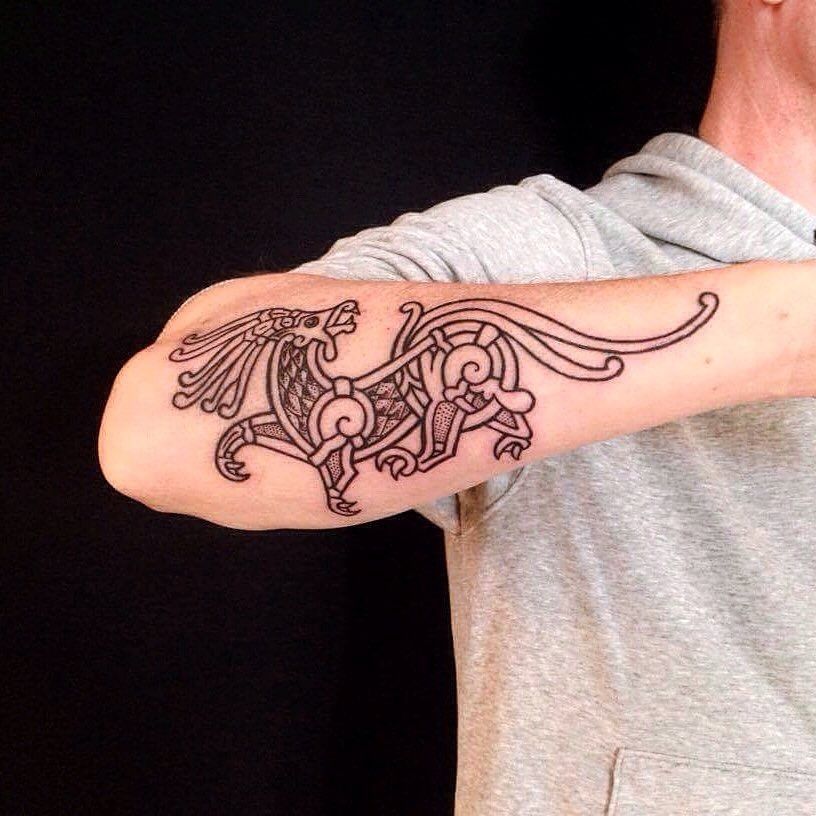 The Saami are a people who live across Finland, Sweden, Norway and the Kola Peninsula. It is well established that their ancestors did, in fact, practice tattooing and also intermarried with the Northmen that we refer to as Vikings.

The meaning and origin of the word "Viking" is debated by historians but the Online Etymology Dictionary says this: "The form viking is attested in 1820, in Jamieson's notes to "The Bruce." The word is a historians' revival; it was not used in Middle English, but it was reintroduced from Old Norse vikingr "freebooter, sea-rover, pirate, viking," which usually is explained as meaning properly "one who came from the fjords," from vik 'creek, inlet, small bay'." 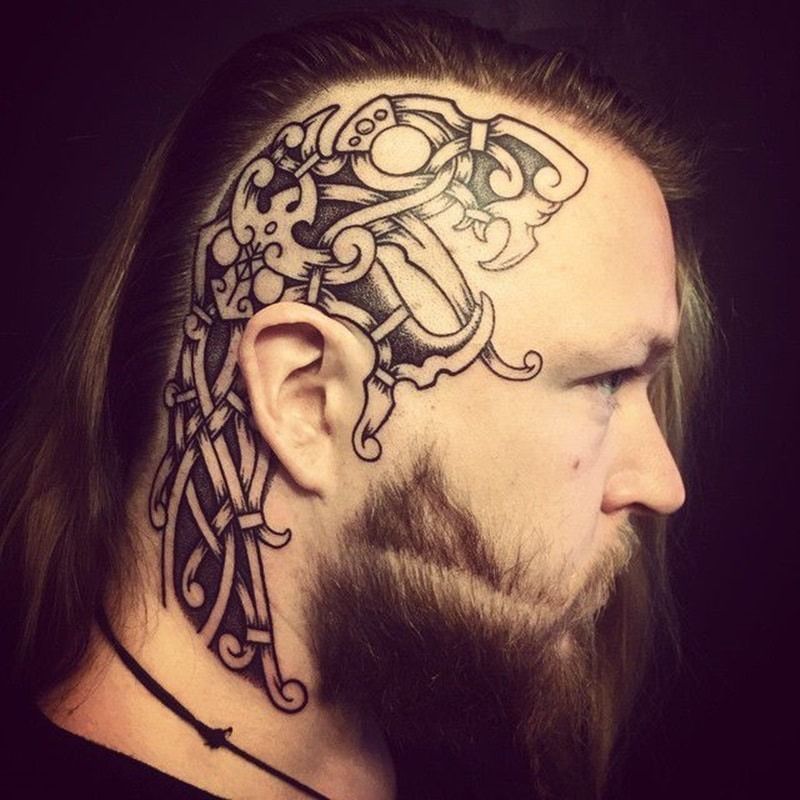 Across Northern Europe, tattooing was quite a common practice and indeed there have been numerous finds when burial places have been uncovered and the skin has been intact. No Northmen though. It seems that the farming and seafaring nations were surrounded by tattooing throughout history.

More interestingly though is the fact that in 793 AD Viking Longships made their way down the Fjords and across the sea, eventually landing for the first time in England.

Why is this so interesting? Well, as a whole the Anglo Saxon people were extremely well known for being tattooed, using woad. This has been well documented by Popes, various texts and even by Gaius Julius Caesar in 55 AD, stating that ‘All the Britons dye their bodies. With woad, which produces a blue colour, and this gives them a more terrifying appearance in battle.’ 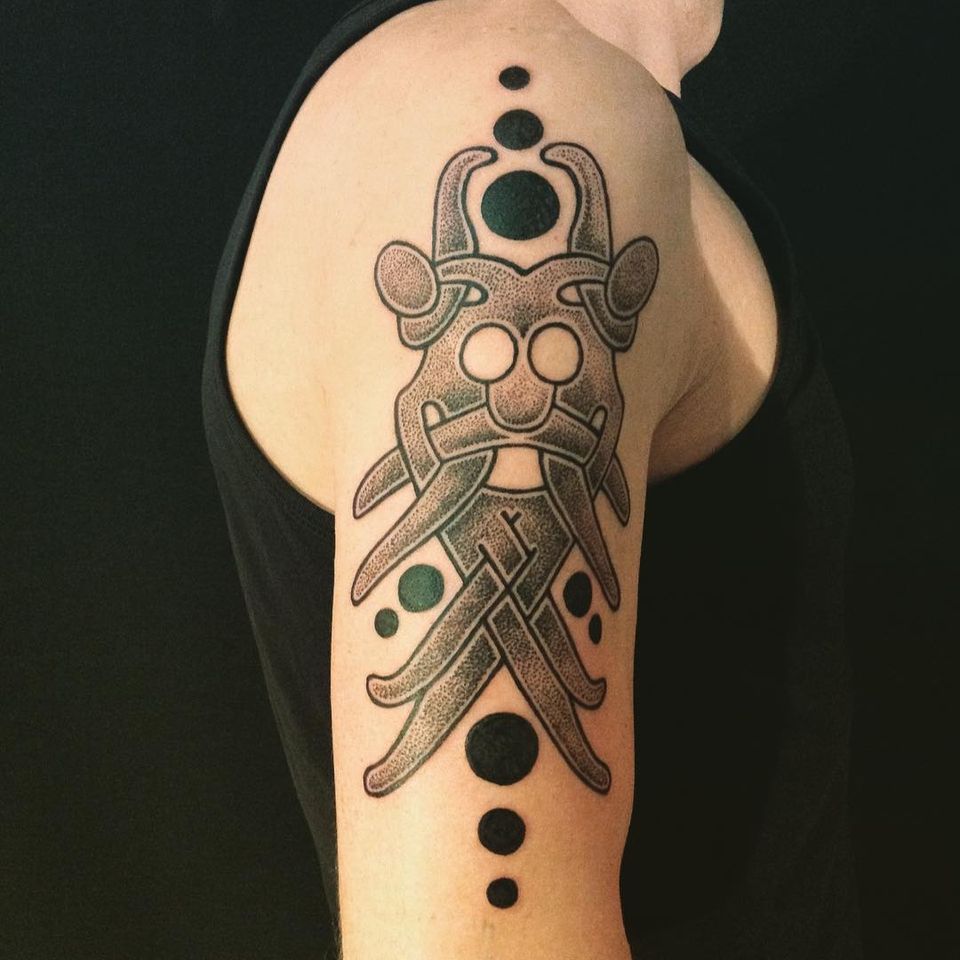 As earlier stated, in truth, there really is no way to know for sure, but evidence would suggest that not only were the Vikings surrounded by people who tattooed themselves, there are a few references to them doing it themselves and they were a very creative people, who regularly adorned items they made with symbols of importance or runes.

So it isn’t such a far stretch to think they did actually tattoo themselves.

I had come across an article that stated something that resembled a tattoo needle and bowl with staining had been found in a Viking Burial site, I can’t for the life of me find it again though, although it is out there! Of course this may have been a tool for dying material, wood or anything, but it is interesting none the less. 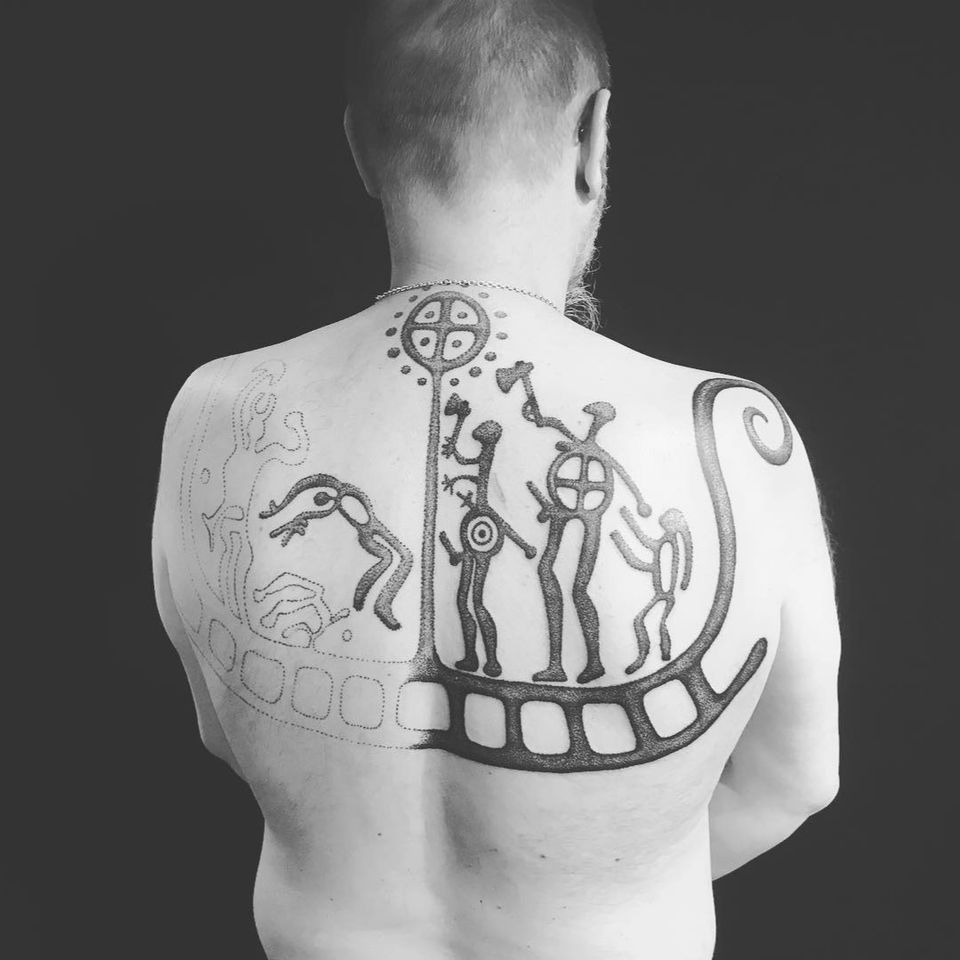 IF they did in fact have an obsession with ink, then what would they have most likely been covered in?

Intricate patterns, elaborate knot work, animals and representations of the Gods maybe. Much of the artwork and carvings that have survived are very reminiscent of Celtic and Pagan designs.

Here are a few of the most likely choices... 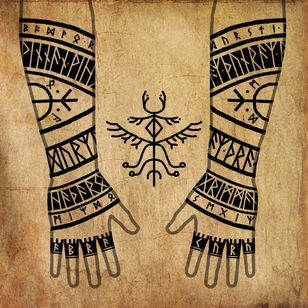 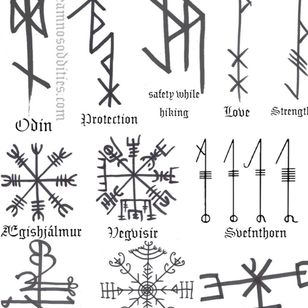 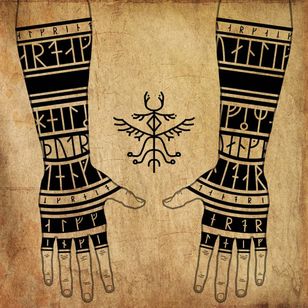 The Most Popular Viking Tattoos

Looking at Fadlan’s account, we have a good start discovering this, ‘trees, pictures and the like.’ Trees is a hugely important mention and most likely, these trees would have been representations of Yggdrasil.

Yggdrasil tattoos depict a huge Ash tree, which is central to Norse Mythology, and connects the nine worlds to each other. It was believed the Gods would visit the tree regularly, that great mythical creatures resided within the tree and that it was quite simply the centre of their universe. 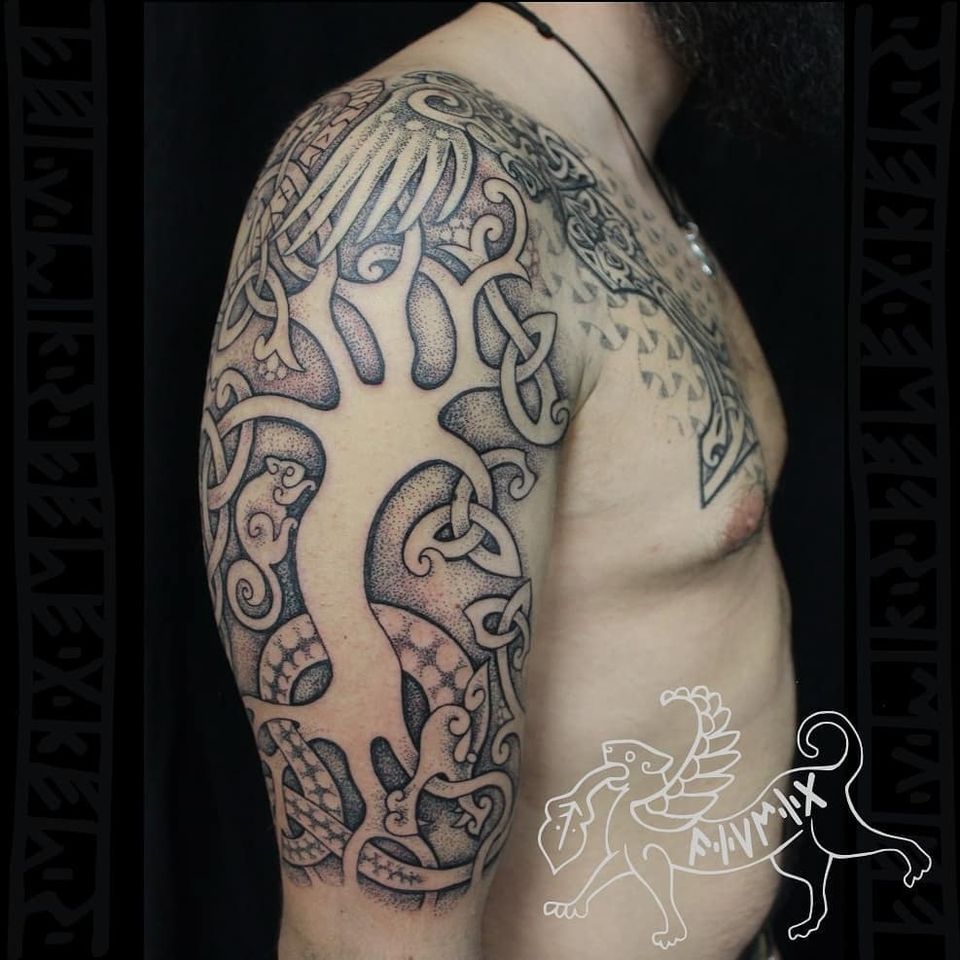 Specifically from the Icelandic Vikings, the Vegvisir, which means "That Which Shows the Way", is a spiritual talisman that helps to guide the bearer on the right path, safe through bad weather.

A Vegvisir tattoo is a favorite of many people from Iceland, including Bjork who has one herself.

However, it is interesting to note that this is "a symbol described only in one modern Icelandic collection of spells, the so-called Huld manuscript. That book has nothing more than this one sentence to say about it: “If this sign is carried, one will never lose one’s way in storms or bad weather, even when the way is not known.” 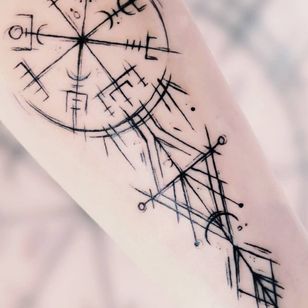 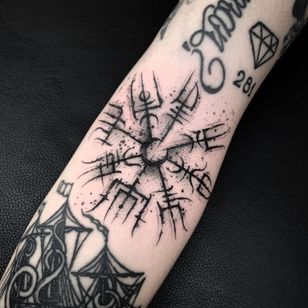 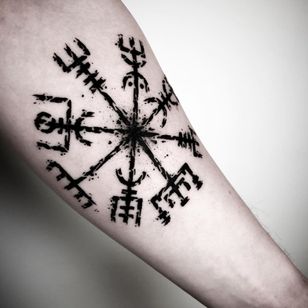 Also from the Icelandic Vikings, The Helm of Awe, as it is more commonly known as, was a stave that was used as protection and to strike fear into enemies.

It looks very similar to the Vegvisir, but hopefully you can notice the subtle differences. 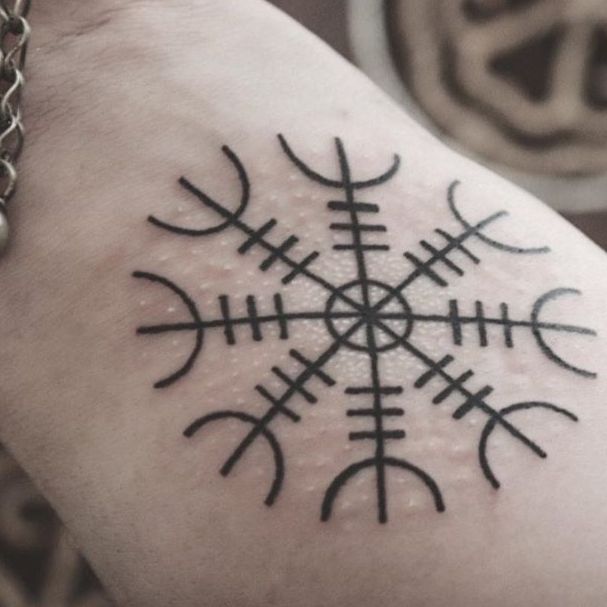 Mjölnir or The Hammer of Thor Tattoo

The Hammer of Thor, likely to have been used to signify power and fear.

Thor’s hammer was so powerful it could level mountains. There are many depictions of the Hammer, but the more modern versions leave out much of the intricate knot work the Northmen were famous for carving!

This is possibly the most famous of all the Viking tattoos due to its use in many films, tv shows, and books. 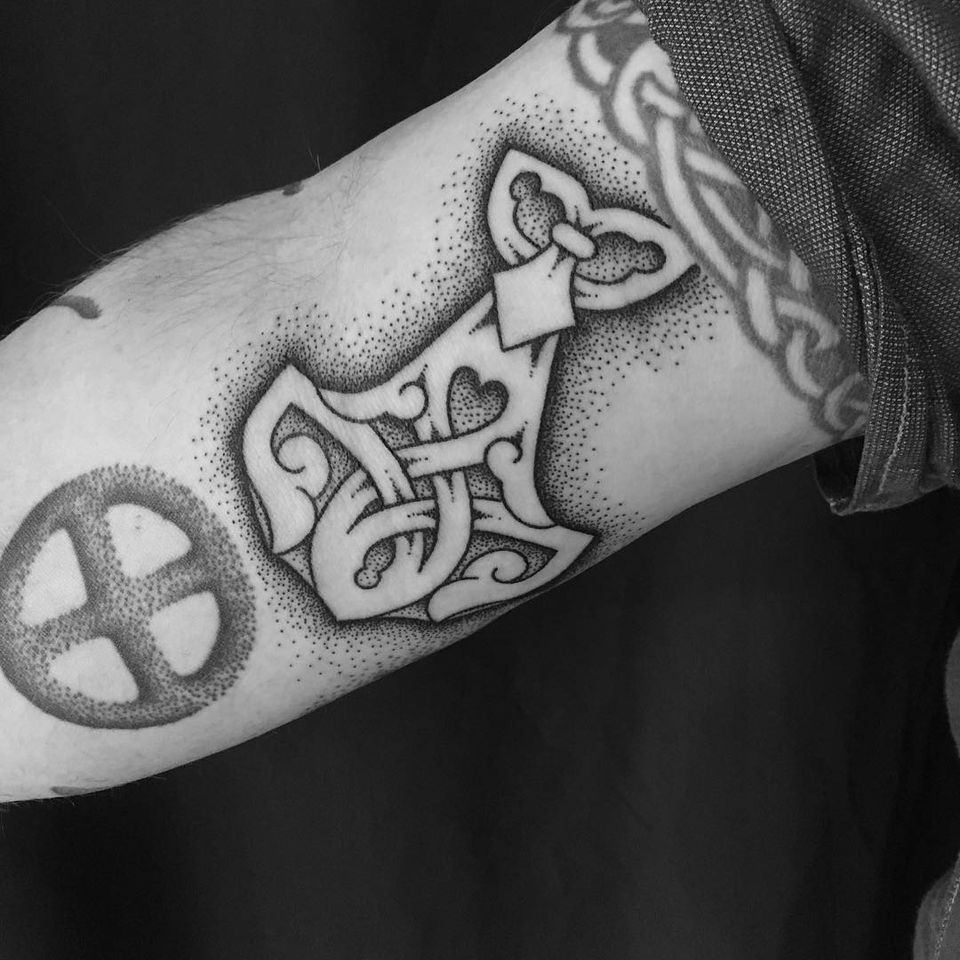 The Triple Horn of Odin, each one named Óðrœrir, Boðn and Són, is said to contain mixture of blood, from Kvasir a man who allegedly could answer any question posed to him, and honey.

It is a symbol of wisdom. Said to be derived from the Greek word "Triskeles" meaning "three legs", the Triskelion is actually seen in many different cultures, include Norse mythology.

As you may imagine, along with wisdom, a Triskelion tattoo can be evolution, the life-death cycle, movement, action, and progression. 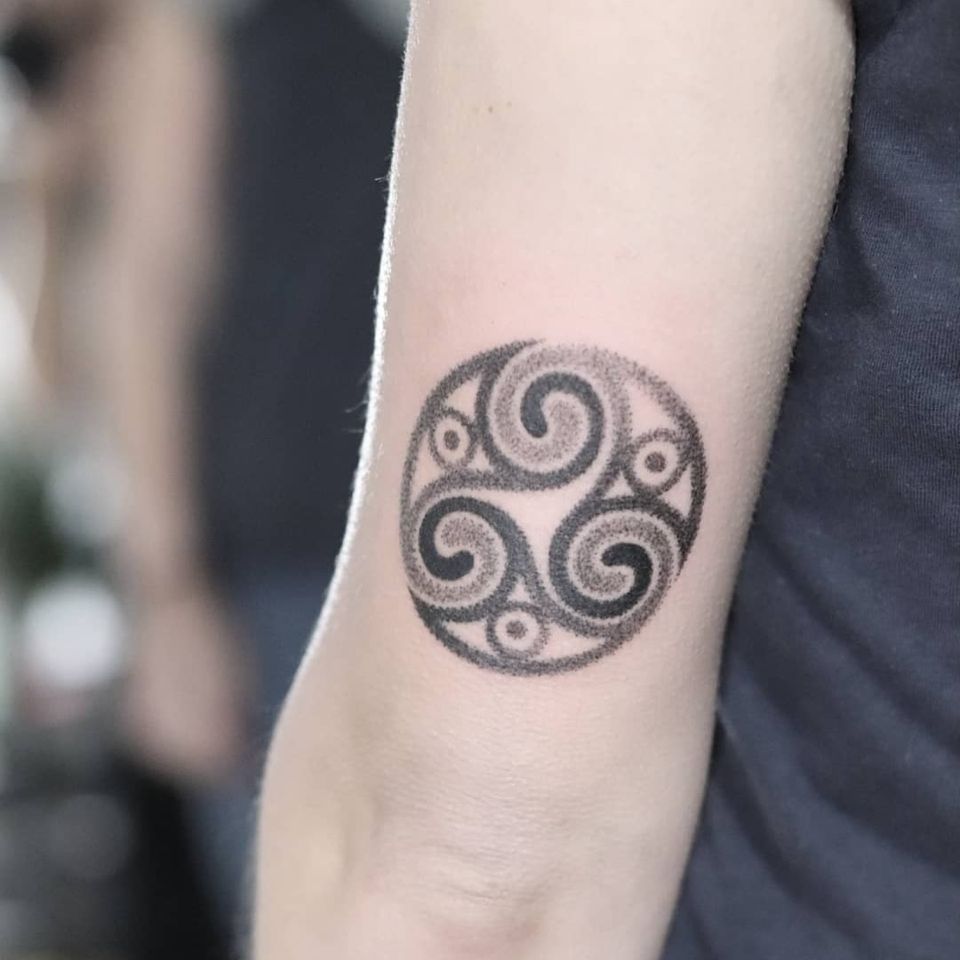 There is no definitive answer to what this symbol, and Valknut tattoos, represent, however the most commonly accepted definition is to do with life and death, with a sprinkling of Odin for good measure.

"Archaeologically, it appears on several runestones and pictorial memorial stones that date from the Viking Age and stand on the Swedish island of Gotland, as well as on grave goods from the Oseberg ship burial in Norway.[1] Its name isn’t mentioned in any period sources; valknut is a modern Norwegian compound word that means “knot of those fallen in battle” and was introduced by Norwegians who lived long after the Viking Age.[2]" 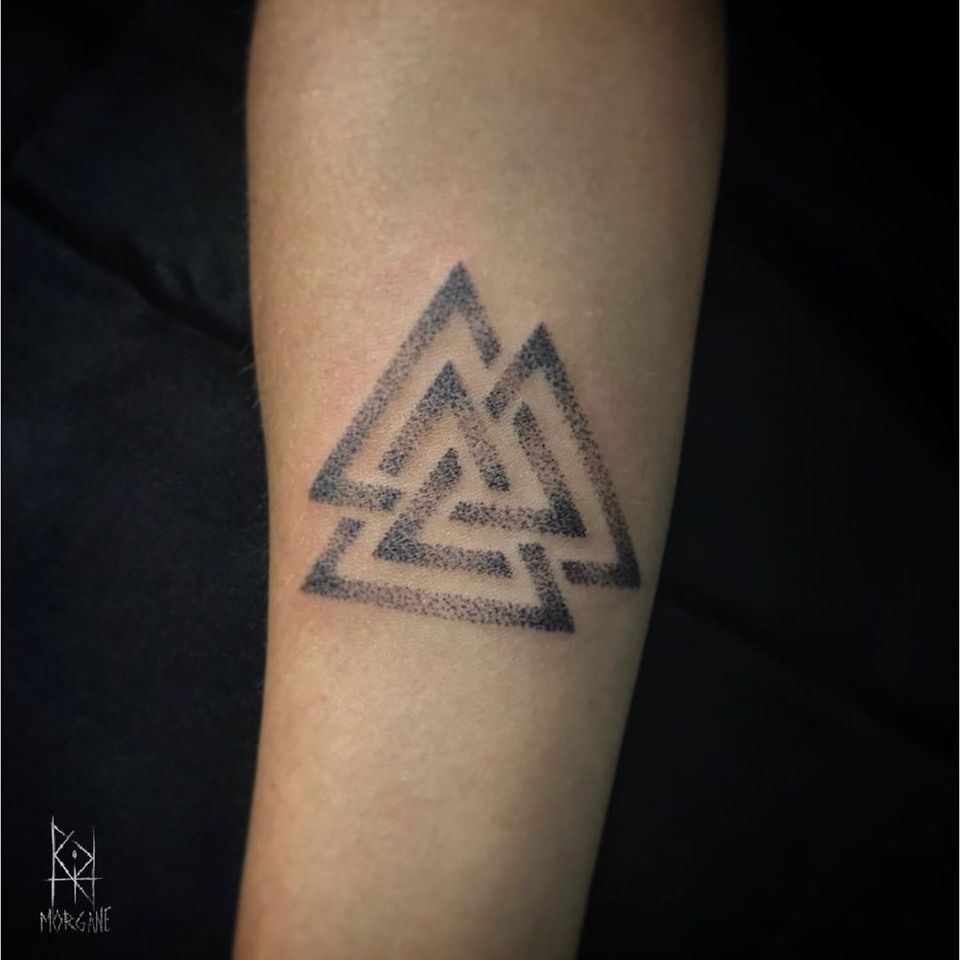 A controversial symbol, The Sun Wheel, commonly refereed to as a swastika, holds its roots in many ancient civilizations, including Old Norse.

It is actually a very positive talisman bringing luck, prosperity and is seen as very powerful.

Unfortunately, more modern history mars the meaning of this one. However, many people have adopted this ancient symbol as a Sun Wheel tattoo that is an homage not only their heritage, but the sun itself.

With connections to fertility, harvest, and health, if done correctly, and with respect, this piece can be what it was originally meant to be: a celebration of life. 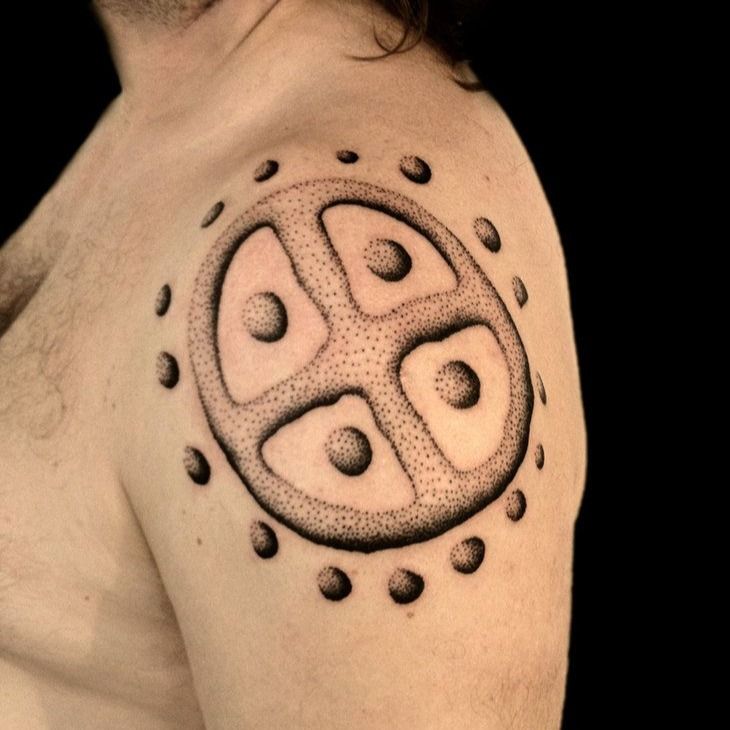 Possibly one of my personal favorites, the Troll Cross does as it says on the tin, it protects from trolls and elves.

Unfortunately the Nazi's also have a history of appropriating this symbol as well. "In fact, an Odal rune with little feet on the end was the symbol of the 7th SS Volunteer Mountain Division Prinz Eugen, a mounted infantry division conscripted from Eastern Europe."

Thankfully, the Troll Cross tattoo is not as tarnished as the Sun Wheel tattoo, and it continues to be a piece of heritage that people get tattooed to ward off malevolent evil. 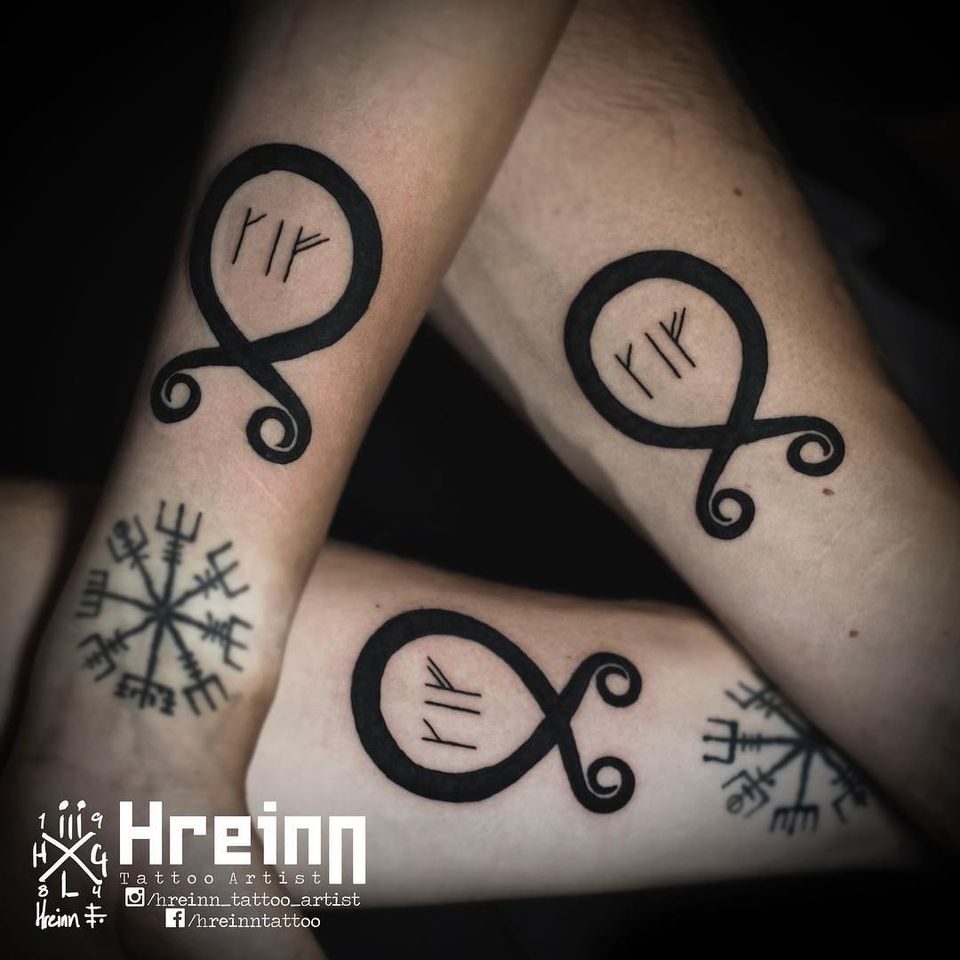 Another weapon of the Gods, Gungnir was the Spear of Odin. It has a long history of being connected with Odin through literature, poetry, and carvings.

Apparently forged by dwarves, the creators of the most powerful weapons for the Gods, the spear was decorated with runes which helped empower the spear with deadly aim.

In fact, through archeology, we know that Vikings often did actually carve runic symbols into their weaponry. 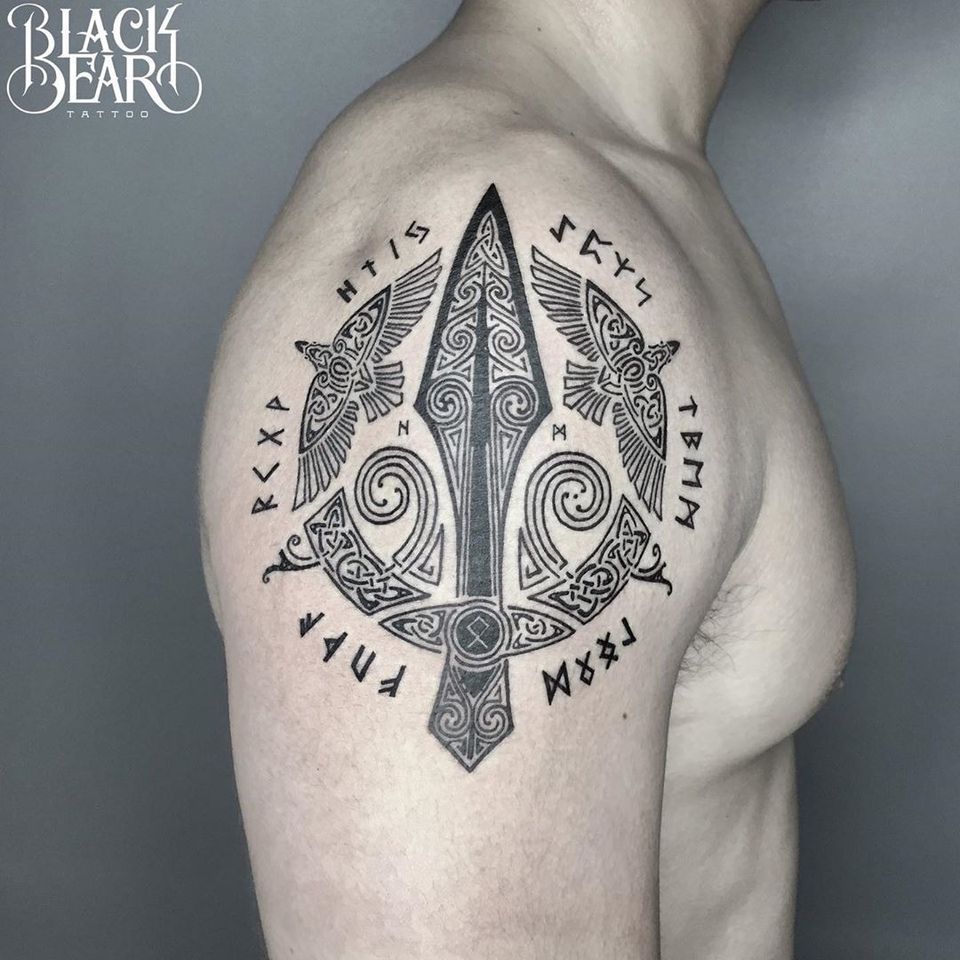 Runes are a form of Norse insignias that are believed to have mysterious magical powers. They come in many different variations, dependent upon what type of energy you are trying to harvest.

Runes actually work as sigils and are said to have a direct connection to the viewer’s subconscious mind. The term rune actually translates to “hidden” or “secret” in Old English, where the word originated. Though these symbols were an ancient form of writing, they were often inscribed on what were thought to be arcane objects, like talismans of protection and other enchanted artifacts.

Depending on what type of circumstances and qualities you’d like to invite into your life, you can determine which rune you select for your geometric tattoo. 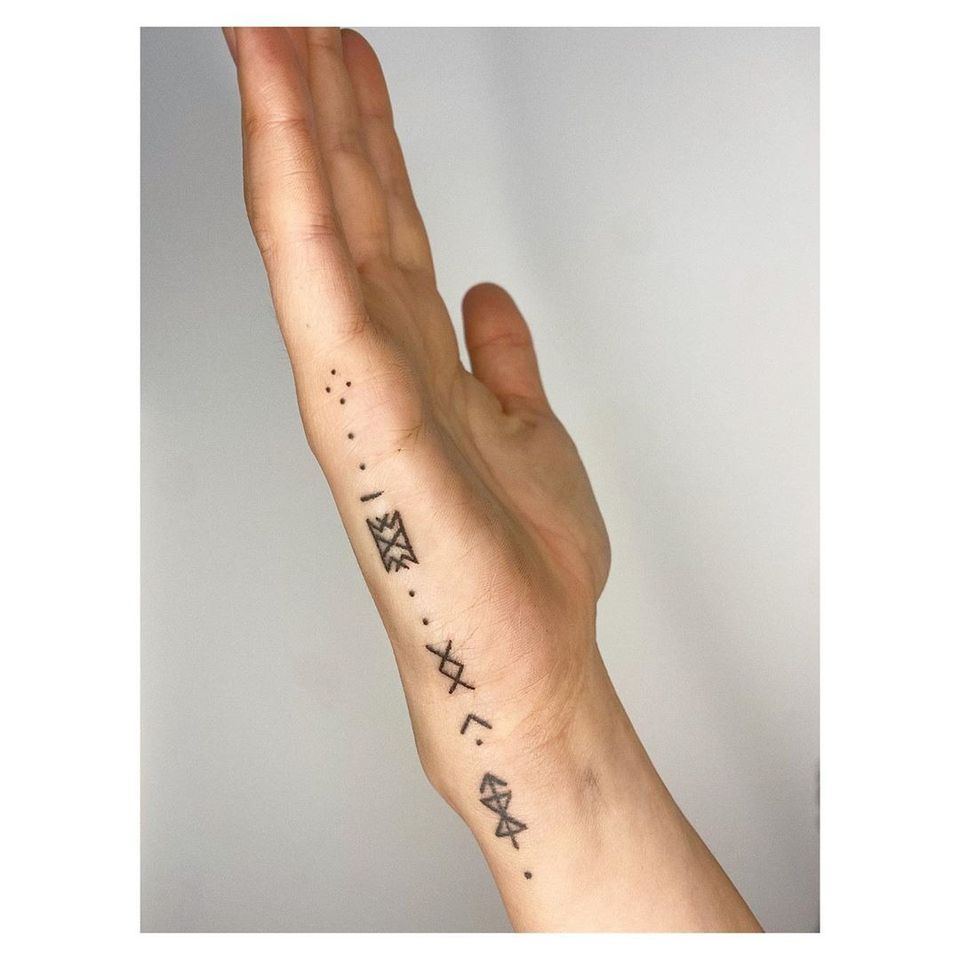 There are hundreds more symbols and pieces of art that could potentially have been used to mark the Vikings, as with other ancient people they all hold tremendous meaning and carry with them a belief in great power.

We hope this article has proved to give you some insight into these ancient symbols, and that you can honor your heritage with a Viking tattoo. 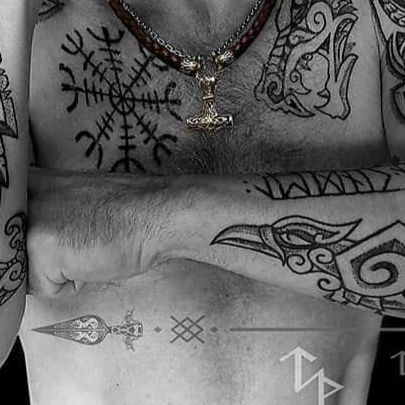 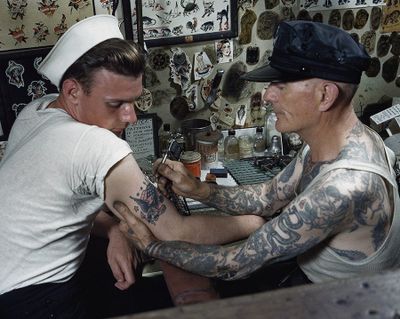 We take a look at the life and times of August Bernard Coleman, aka Cap Coleman, one of the forefathers of American Traditional tattooing.