Intensely vivid tones, eye catching characters, rounded shapes, and cartoonish concepts make New School tattooing a highly animated aesthetic that pulls from many different places for its style. With foundations in American Traditional, Neo Traditional, as well as anime, manga, video games, and comic arts, there are few things this style does not borrow from. In this guide, we look at the origins, stylistic influences, and artists that make up this incredibly saturated New School tattooing aesthetic.

The Origins of New School Tattooing

One of the few things people don’t notice about New School tattooing is how its foundations are cemented within American Traditional. Many of the rules set forth by Trad artists long ago help with the clarity and healthy aging of tattoos. Bold black lines help keep color from spreading, large shapes and designs help with the ability to easily form highly legible tattoos; these are all things that New School keeps close at heart. There’s also the pretty obvious relationship with Neo Traditional; you can see the Art Nouveau and Japanese aesthetic influencing artists, usually, quite clearly. The differences, however, are also easy to see. With technological advances in pigments for inks, tattooists are able to use striking colors, from fluorescents to neons. Considering where New School pulls its iconography from, these tints help to solidify the cartoonish aspects of the style. There’s also just that: New School tattooing is mostly influenced by a variety of pop culture. Gamer ink, comic book fans, anime and manga characters...they all find a home here.

The real beginnings of New School tattooing are sort of lost in translation and time due to the influx of client requests, changes in the industry, and the generally closed and exclusive air of the tattoo community. Some people argue that the New School style has origins in the 1970’s, while others see the 1990’s as the true emergence of the aesthetic we now know. Regardless, most tattooers see Marcus Pacheco as one of the main forerunners of the genre, however some ink historians regard this change in style to be not only an evolution of the artist and art, but also sparked by changing client tastes. It should be noted that during the 90’s there was certainly a resurgence of a true interest in mainstream pop culture; we can see ink from that era including a great deal of cartoon and Disney influences, as well as graffiti compositions, and more. Betty Boop, tribal tats, Fresh Prince of Bel Air, Pokemon, Zelda; these are some of the most iconic ink ideas from the 90’s, a time when concepts were merging and clashing.

It actually makes sense that in the late 20th century pop culture become the forefront of aesthetic culture and change, and that information would be continually shared in newer formats. In 1995 the internet was finally fully commercialized, and users were hit with an incredible amount of visual and intellectual material, more than ever before. Perhaps the most famous internet provider, known for its “You’ve Got Mail” slogan, is AOL which, in itself, attests to the power of the web, and of pop culture. Though internet was emerging in the late 1980’s, the 90’s and early 2000’s were a time inundated with new ideas, styles, and a plethora of information and inspiration that would go on to influence tons of artists and industries.

There has often been a division between American Traditional artists and New School artists. The rules, techniques, and mediums of tattooists is usually closely guarded information, only shared through artists and devoted apprentices. It wasn’t only the demand for new designs via customers, it was also a hope of some artists to progress and share new concepts and modes of working; to work outside the rules. With the invention and public integration of the internet, this progression was made easier. Traditional American tattooing was blown open with the stylings of Neo Trad, New School, and about a thousand other different styles and takes on this ancient artform.

The Styles of New School Tattooing

As mentioned above, the Art Nouveau stylings of Neo Traditional can easily been seen within New School tattooing as well. But the influence of Japanese aesthetics not only comes from Irezumi iconography and Art Nouveau decorative techniques, but through video game culture, comic books, and most often: anime and manga, as well. This impact is not only due to pervasive public access to the internet, but also cable television. While Japanese animation has an incredible history of its own, overseas appreciation wasn’t really widespread until Western adaptations, dubs, and networks started pulling animes for their own programming. Toonami, first originating as an afternoon and evening block on Cartoon Network, exhibited shows like Dragon Ball Z, Sailor Moon, Outlaw Star, and Gundam Wing. This was also in thanks to the materialization of highly skilled animation studios like Studio Ghibli, which in 1996 formed a partnership with Disney that would insure a rather new and extensive viewership. All of these steps helped bring anime, manga, comics, and other Japanese cultural movements to Western fanatics who would then turn to New School tattooers, the only artists in the industry able or interested in bringing their wonderful nerd dream tattoos, to life.

The same could be said of Disney. In the 1990’s Disney had a renaissance of their own creating some of their most well known and beloved films to the public. Aladdin, Beauty and the Beast, The Lion King, The Little Mermaid, Pocahontas, Mulan, Tarzan, and so many more were part of this new life within the Disney repertoire. And even today, these iconic films are mainstays of New School tattoo portfolios. One thing that can easily be said of the style is the obvious passion behind the work; many contemporary New School pieces are based on childhood nostalgias or fascinations. Comic book heroes, animated characters, all of these are, perhaps, the most common concepts within the style. And it makes sense; tattoos are often a way to show the outside world your affiliations or deepest infatuations. Within New School tattooing, and the industry in general, there is a devotion seen in very few other communities, but those other super devoted communities definitely include gamers, comic and graphic novel lovers, as well as anime aficionados. In fact, in Japan, there is a special word for this type of person: Otaku.

While cartoons certainly have the most influence within New School tattooing, graffiti is another large slice of the pie. Although hugely popular in the underground of the 1980’s, the popularity of graffiti hit an all time high in the 90’s and into the 2000’s. Wild Style and Style Wars were two films that brought street art to the attention of the public in the early 80’s, but with the emergence of artists like Obey and Banksy, graffiti became a mainstream art form quickly. New School tattooists have used the bright colors, drop shadows, and swooping, graceful lines of street artists as inspiration for their own work, and sometimes the fonts themselves can be part of the design.

The Artists Within New School Tattooing

Due to the easy adaptability of the New School tattoo style, many artists choose to work in this style and influence it with their own personal tastes and predilections. Michela Bottin is an artist known for her perfect recreation of many Disney characters, from Lilo and Stitch to Hades from Hercules, as well as Pokemon creatures and anime stars. Kimberly Wall, Brando Chiesa, Laura Anunnaki, and Lilian Raya are also known for their highly colorful pieces including many manga inspirations. Logan Barracuda, John Barrett, Jesse Smith, Mosh, and Jamie Ris are really straight forward New School with surreal cartoon influenced shapes and styles. Artists like Kike Esteras, Andres Acosta, and Oash Rodriguez tend to merge their work with Neo Traditional and Realist stylings, creating a whole new look of their own.

Again, with foundations in Traditional American and Neo Traditional, New School tattooing is a wonderfully strong aesthetic that pulls from pop culture to create a whole new style that deeply resonates with many. The history, stylistic qualities, and artists within the New School tattoo technique have created a genre that gamers, anime lovers, and comic book geeks adore; this style has carved out a place in the community just for them, and so many more.

By Justine Morrow
Need help finding a tattoo artist for your idea?
Get Started 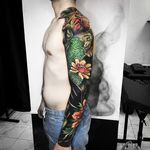 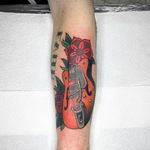 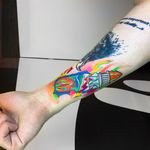 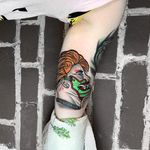 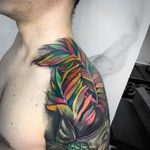 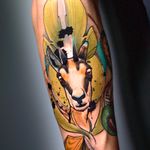 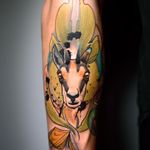 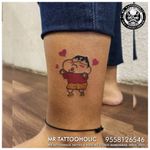 The 16 Most Trending New School Tattoos 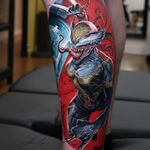 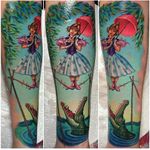 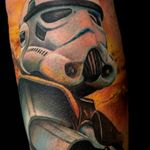 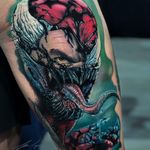 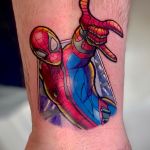 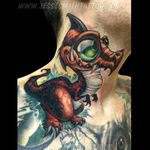 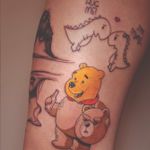 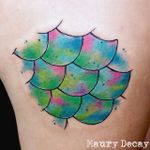 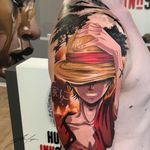 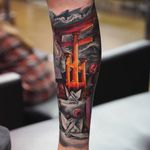 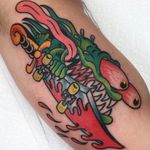 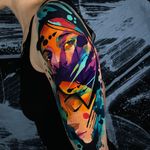 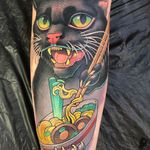 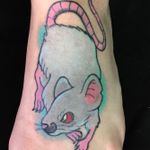 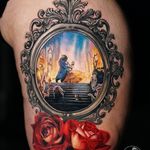